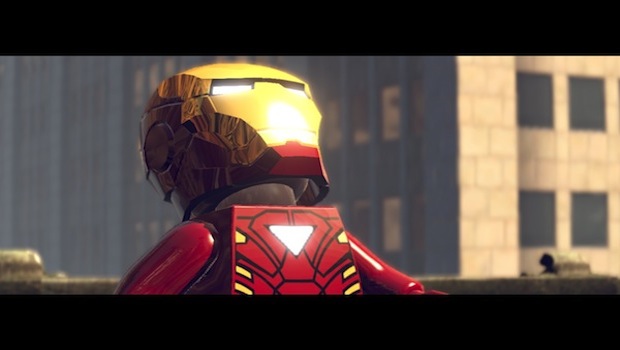 A great many games have arisen from the playtime juggernaut that is LEGO, with some classics (remember LEGO Island?) and some that fell short of the mark. However, LEGO has a knack for striking pay dirt when they combine pop culture staples with their brick-based universe (often when the pop element vastly outweighs LEGO’s relative cultural significance – see: Harry Potter). It’s not the first time they’ve used superheroes, but the hope here was to reinvent the formula a bit and put out something that was both fresh and extremely fun. Let’s find out how they managed:

LEGO Marvel Superheroes operates on the basic premise of advancing through fast-paced levels that are broken down into checkpoints while unlocking tons of new characters along the way. At the very beginning, you’ll switch between the Hulk and Iron Man while trying to liberate Grand Central Station from the clutches of the Sandman and his ephemeral henchmen. The game starts off in tutorial-like fashion, actually poking fun at itself for the Hulk’s simplistic approach to crime-fighting (“We’ll need to lay out a very careful plan,” says Iron Man, a.k.a. Irony Man, “or, we could just smash everything!”). With this dynamic duo at your disposal, the game acquaints you with how to pull off various combo moves and abilities while you smack around a bunch of baddies and blow up some taxis. The game quickly gets more complex, however, with some very enjoyable puzzles.

Before we get further into the various nuances of the gameplay itself, it’s important to mention the boldest aspect of the game: the graphics are actually beautiful, mesmerizing even. Never has it been so much fun to see the way that the developers were able to render an entire world out of plastic bricks — and then deliberately smash it all to pieces. The amount of debris that you can create may seem like an unimportant consideration, but it actually makes the game seem that much more lifelike — in the sense that we also used to smash our elaborate LEGO creations eventually, and where would the game be if they didn’t allow you to do that here? The amount of visual detail present comes as great news for LEGO fans who were eager to see a really gorgeous title result from this project, and they certainly knocked that fastball out of the park.

Slick graphics are all well and good, but many a pretty game has vied for ‘coaster of the year’ award when they failed to provide a decent user experience. LEGO Marvel Superheroes definitely did not drop the ball in this regard, as the game is surprisingly addictive and fun. You get to play as dozens of characters (on both ends of the moral spectrum), and it’d be pretty tough to get bored given the depth of the story that the writers have assembled. The sheer amount of heroes and villains they’ve assembled here is no small feat either, and adds a healthy dose of variety to an already diverse gameplay experience.

In terms of the controls and so-called ‘feel’ of the game, this may be the one aspect where they came up a bit short. Playing it on a PC comes with a fish-out-of-water feeling that can often result when a game was really meant for a controller rather than a keyboard, but it’s no great loss. You can always plug in a console controller if you really hate playing with a keyboard, but some people like keys much better anyway. Plus, the way that the camera is oriented in a north-south configuration — where ‘W’ moves your character towards the background while ‘S’ has him running at you — feels distinctly like the orientation of a console game. But again, it certainly does nothing to take away from the overall experience, and many will find it rather enjoyable to play a game that comes off as a very thorough Xbox 360 or PlayStation 3 port — never a bad thing, in our estimation.

There’s very little wrong with LEGO Marvel Superheroes -- it succeeds in a surprising number of ways. There are practically zero instances of blatant failure on the part of the developers, voice actors, writers, and other assorted ‘big picture’ guys who made this release a reality. That being said, there are a few cases where you may get frustrated from an overly challenging puzzle, or on-screen directions that don’t seem to make any sense. This game balances the brain-teasers perfectly with some satisfying button-mashing, along with an extremely varied arsenal of weapons and super abilities. You’d be hard-pressed not to enjoy this game for at least a few hours, but go beyond that and it might get tedious.