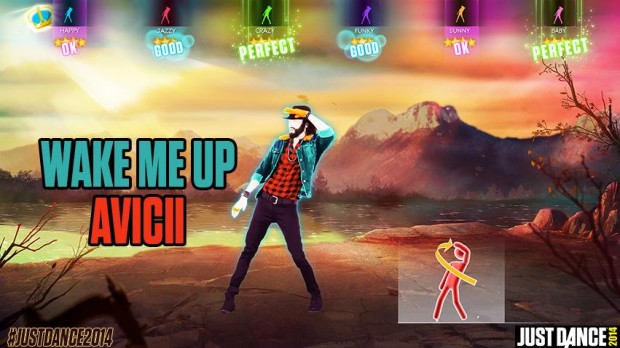 I’ve competed at an International level with my martial arts and won. I move with grace and precision when I fight and during forms. Absolutely none of that translates to the dance floor. My wife and I are trying to get in a bit better shape, and what could be more fun than dancing the calories away, right? Just Dance 2014 is my first brush with Ubisoft’s dance franchise – let’s see if it could make me a better dancer, or at least maybe a thinner one.

Just Dance 2014 is a next-gen launch title, but since we are a month away from that madness we decided to let the Xbox 360 version invite us onto the dance floor. Thanks to the Kinect, we wouldn’t have to hold anything in our hands like the Wii or PS3 version – we’d be able to make complete fools of ourselves without anything in our way.

Visually, Just Dance 2014 looks like a candy-filled piñata exploded in my eyeballs. You can see from the trailer below that the game uses a festive array of colors and goofy costuming to spice up what would otherwise just be a dancer on the screen to mimic. As we played through the 50 included songs (49 on disc, and one free DLC), I was always surprised by the madness waiting around the corner. Everyone wearing Proton Packs during the Ghostbusters song? Check. Fur coats and hats during a track from Macklemore. Fuzzy. Sado-Bondage lycra for Lady Gaga? Mindbleach! Add that to a panda costume for Ke$ha and you’ve rounded out some of the crazy. Seeing half a person to represent the ghost Slimer from Ghostbusters was a fun touch.  There are normal folks dancing too, not to worry. The nice part about all of it is that it is real people doing these moves, so even if you can’t do them yourself, you can see how somebody with more skills than you could do it. I can tell you this – the dancers that Ubisoft used for this game are pretty damned amazing. Hats off to them.

Don’t let the skills shown above scare you off – Just Dance 2014 has an easy, medium, hard, and extreme difficulty level. Because the dancers are motion captured instead of animated, the difficulties are pretty much locked to the choreography that the dancer on the screen is serving up. There are alternate choreographies to unlock, but there is no ‘select easy for less dance moves’ sort of adjustment here – each dance is locked into the difficulty that was choreographed and recorded.

Given the annual iteration of these titles, the soundtrack is pretty much one of those “Smash Hits of the Summer!” CD box sets you see on television when you are up far too late. Like any game centered around music, how much you like the soundtrack is an entirely subjective affair. Highlights include hit machine Katy Perry’s “I Kissed a Girl”, titular title “Just Dance” from Lady Gaga, “Starships” from part-time clown impersonator Nicki Minaj, and summer smash-hits “Blurred Lines” from talk show maven Robin Thicke and “Get Lucky” with French robot-duo Daft Punk. There are a bunch of tracks that reach further into the past with “Could you be loved” by Bob Marley and “99 Luftballons” by Nena as examples. There are also a bevy of already-announced tracks for download, but I was very surprised to see that you cannot import songs from previous games into this one. Ubisoft’s own Rocksmith 2014 can pull off this trick without a hitch, so it’s a bit of a head scratcher.

I was surprised to see one particular feature, but if you are shooting for a party atmosphere it makes a lot of sense – Karaoke. Plugging in a microphone lets the player rattle off lyrics and earn points while their friends dance to the beat. This is perfect for when somebody needs a break, but they want to still be part of the trainwreck.

Speaking of trainwreck, Just Dance 2014 will randomly capture video that will show up at the end of your song. You can upload them to the usual social media suspects for your friends to upvote and send to Tosh.O for full-on ridicule and fun (I’m kidding – there is no ‘Send to Tosh’ option). For those who are a bit more camera shy, you can fully disable this feature as well. Unfortunately I was unable to get any of the JDTV (Just Dance TV – the social media center of the game) uploads to pull up during my play time, despite multiple attempts. Either the servers were down while I played or nobody is feeling brave yet.

Mechanically the game functions like you’d expect. There is the usual sketchiness of the current-gen Kinect sensor that sometimes frustrates, but that’s not the fault of the game. As you dance you’ll score points for your moves. The hands on the dancers are your primary indicators of where you should be, though it does seem to keep track of your legs too. You’ll get a score like “Good”, “Perfect”, “Ok”, or an “X” if you miss a move. In the end it’s also graded with a star ranking, awarding you Mojo. Mojo is the currency for the game, allowing you to purchase new avatars, choreographies, and harder versions of the various tracks. At the top end, you’ll even get a crack at “Extreme” versions – and they are no joke.

The Kinect sensor may free your hands, but it can also be your worst enemy. Since the other versions key in on the Move controller or a Wii remote in your hand and the Kinect watches total body movement, the team seems to have loosened up the restrictions a bit. This makes the game a little more forgiving, but it can also make it a bit more inaccurate. The PlayStation 4 and Xbox One versions will undoubtedly remedy this in fast fashion, but the Xbox 360 is pretty much right in the middle of that equation. In the end you should take a relax and have fun approach.

A new game mode called “Just Sweat” is your chance to cut a few pounds, giving you a 10, 20, or 40 minute workout. You can also select a free mode if you want to tailor something specific. The tracks can be built like a playlist, including selecting classic versions or the far more difficult Extreme versions. Even at the easiest levels, Just Dance 2014 has you moving quite a bit more than other dance games, but the moves are pretty intuitive, making it fun. The game also features full drop-in, drop-out support, so if your friends catch you dancing they can just jump in and play.

Mashups are unlocked as you play through tracks, giving you the chance to dance with a larger array of moves incorporated into an amalgamation of similar-bpm tracks. You’ll get a full array of characters from the game, including a few of the crazy ones. It’s a fun mode to experience your music collection in a new way.

On-stage mode is a new addition to the series, letting one player be the performer with the other players acting as their crew. This gives you the chance to sing, dance, and lead your backup dancers to the height of stardom. Speaking of other players, the World Dance Floor is your key to multiplayer, letting you see other players that you can dance with by scrolling around a global map. It seems to match you with similarly skilled players, so don’t be shy – they are as bad as you!

As longtime fans of this games’ competition, we thought it’d be a hard task to take the crown from our current favorite, Dance Central 3. The new game modes are interesting, and the approach to difficulty settings rewards all players if they just dance and enjoy themselves. In the end, Just Dance 2014 has a soundtrack that should please most people, and the DLC is rock solid. Any shortcomings I may have are covered by the fact that Just Dance 2014 is fun enough to get my friends and family off the couch. Just Dance 2014 is the new king of dance – we’ll see you on the dance floor, just don’t expect to see me on JDTV!