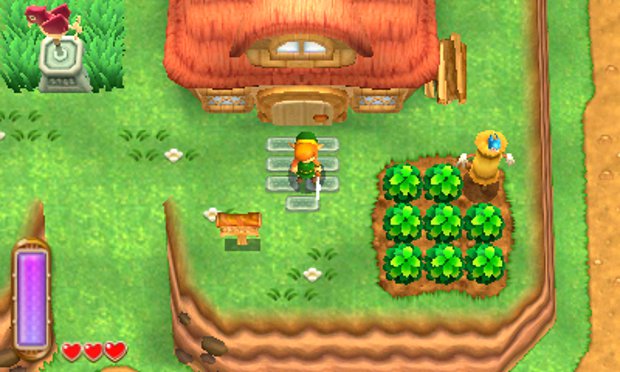 It’s amazing what cutting the fat and returning to basics can do for gameplay.

The Legend of Zelda: A Link Between Worlds for the 3DS is Nintendo revisiting a golden period in the Zelda franchise. There’s no lengthy introductory sequence, no flashy cut scenes, no superfluous dialogue; it’s all slashing enemies, opening chests, and setting bombs. This is our hero Link the way we learned to love him — solving dungeon puzzles from an overhead perspective. It’s also one of the best Zelda experiences in years on any platform.

Those of us who enjoyed the heyday of the Super Nintendo console get something special out of this title. A Link Between Worlds is the spiritual successor to what many consider to be the pinnacle of the franchise: 1991’s A Link to the Past. This new title is permeated with nods to that timeless adventure. The Blacksmith’s shop, Kakariko Village, Zora’s Den… The entire overworld map has been updated and recreated in three dimensions. The music for the vast majority of the areas is comprised of excellent new arrangements of the original score from A Link to the Past. Even little audio cues remain, like the jingling armor of an enemy knight who just noticed you, or the twinkling of rupees as Link greedily snatches them up. It’s a wonderful homage, down to reliving the moment of pulling the Master Sword from its pedestal.

More than another HD remaster

But make no mistake: this title is more than another HD remaster of a classic game. Throwbacks aside, A Link Between Worlds is an entirely new experience — new story, new characters, new weapons, and new dungeons — and a fantastic one, at that.

Right from the start, the visual presentation of this title is a top-notch affair on the 3DS. After too many long, eye-straining sessions with other games on the console, I’ve become gun-shy in enabling the 3D effect at all. I was ready to approach this adventure in the same way, but there was no need. Aside from striking a wonderful balance between old-school aesthetic and new-school design, the visuals are silky smooth, with or without 3D — no discomfort whatsoever. I played every second of my time with A Link Between Worlds with the 3D effect enabled, and I’m not certain that I could make that claim about any other 3DS title.

A Link Between Worlds also succeeds at using the 3D effect to portray a sense of depth and height to many areas of the game. Most dungeons are comprised of puzzles that make liberal use of the vertical plane; the 3D effect can even help some solutions appear more evident. It’s also quite impressive to be staring down a deep volcanic chasm while you carefully navigate Link’s steps to descend safely. It adds size and scale in a way not possible in 1991.

It’s not all about the visuals, though; much of what makes this game such a joy to play is that the feel of the classic has been faithfully restored. From walking around and swiping your sword at bushes, to swapping between two dimensions in order to reach certain areas of the map, it’s all in the spirit of A Link to the Past. The only aspect that actually feels dated is the use of projectile attacks — lining up enemies with the bow and arrow feels clumsy in this day and age, as lock-on targeting has become the norm. Still, it’s quite a statement that virtually no other facet of the decades-old gameplay feels out of place.

The majority of the journey in A Link Between Worlds is spent chasing down a mage named Yuga who has kidnapped the Seven Sages with the intent of reviving the all-powerful Ganon (oh yeah, he’s here too). One of the most unique aspects of this title is a result of Yuga and his special power: he transforms his targets into paintings to trap them. It’s not far into the game when Yuga transforms Link into a painting on a wall — but thanks to a special gift, Link later emerges in his original form, but also with the ability to change back into a painting on command. This becomes an important puzzle-solving mechanic for the remainder of the game.

Initially, solving the dungeon puzzles feels very familiar — everything works the way you’d expect it to in a Zelda title. Is the fire out? Light it with the lantern. Pile of rocks on the wall? Blast them open with a bomb. But after the encounter with Yuga, solutions require a bit more out-of-the-box thinking. You may need to change into a painting to shimmy across a wall to get over a gap in the floor, or transform so you can slip between prison bars. In the meat of the game, assuming the painting form is necessary to pass between the lands of Hyrule and Lorule (yes, really), the new iterations of the Light World and Dark World from A Link to the Past. The ability to assume this form succeeds in encouraging you to examine classic Zelda predicaments in brand new ways.

Link has access to most special items from the start

In a clear departure from previous Zelda titles, Link actually has access to nearly all “special” items (like the boomerang, hookshot, or bow and arrow) from the start of the game. A character named Ravio acts as a vendor for these items early on, though they’re initially only up for rent. If you are defeated, the rentals are returned to Ravio and you must pay to retrieve them again.

Part of the wonder of a Zelda game is earning these items out in the wild, so this change was initially jarring. It felt strange to be able to use the hookshot to cross a large gap in a bridge right off the bat — it takes some of the satisfaction out of finally reaching that area of the map at a later time. However, there are still some necessary special abilities that are earned elsewhere in the game and not readily available at first — so the classic aspect is not entirely abolished.

Better, the renting privilege extends to items like bombs and arrows, tools that were considered consumables in previous titles. In A Link Between Worlds, these items — along with all Ravio rentals — are infinitely usable, only governed by a meter in the lower left of the screen that gradually recharges on its own. You’ve got a bottomless bag of bombs — but if you use a few too quickly, you may have to wait a moment before using another. Not having to scavenge for bombs alone makes this entire feature worthwhile.

It might sound inconvenient (and expensive) to have to keep returning to Ravio to re-rent your items upon defeat, but it’s not necessarily so. To solve for the price of rentals, you’ll eventually have the option to pay a larger price and buy each item outright. Doing so makes it yours forever, no matter what. Also, in a fast-travel mechanic accessible from the overworld at any time, you can call upon a witch named Irene to take you to any weather vane that you’ve come across in your travels. This feature is extremely convenient and helps keep the grind out of exploration.

The design is streamlined and simple to use

The 3DS touch screen is put to good use in A Link Between Worlds. While the action takes place on the upper 3D screen, the lower touch screen houses a persistent map and an easy-to-manage inventory. Whereas the B button will always attack with the sword and A is the obligatory “action” button, the X and Y buttons are mapped to special items. A simple drag and drop makes assigning these abilities a snap, but there’s also a very convenient hot-swap feature that lets you prioritize which items you use the most. The design is streamlined and simple to use, making the whole experience rather comfortable.

Another key feature of the 3DS is put to intriguing use in this title — A Link Between Worlds players can Streetpass each other and send their character into another’s game world to be challenged to a duel. It’s a fun idea, but as with all Streetpass features, it depends entirely on how many people close to your physical location are also playing (and carrying their 3DS with them at all times). I imagine this would be put to much greater use if Nintendo at least opens it up to those on your 3DS Friend List for some remote exchanges.

This game is made better by stopping to smell the roses

Placing a metric on play time is difficult — it’s largely dependent on how quickly you are able to solve the game’s puzzles in the numerous, unique dungeons. If focusing only on the main objectives, A Link Between Worlds can potentially be completed in less than 15 hours. But this game is made so much better by stopping to smell the roses. While the map is small by today’s standards, this can be a boon in that you’ll hardly ever think twice about returning to an area to search every nook and cranny. And much of the time, you’re rewarded for your efforts. There are many secret areas throughout the game that house new characters and additional puzzles that are not necessary to finish the primary quest. Revisiting hardly ever feels like a waste of time in this adventure.

Many great Zelda titles have come and gone over the years, but it is supremely satisfying to have a brand new excuse to return to the land of Hyrule as it was presented in 1991. It’s not just a nostalgic trip; A Link Between Worlds is an excellent game on its own. That said, this title functions most effectively as fan service to us old heads — the references to the source material are as numerous as they are captivating. But even if you joined the series at a later date, this is a game that begs to be played. The Zelda brain tease is back with the emphasis in all the right places.

More than just fan service, The Legend of Zelda: A Link Between Worlds is a modern approach to the world established by the 1991 SNES adventure, A Link to the Past. Traverse the same overworld to uncover a brand new system of delightful dungeons -- a familiar formula injected with fresh abilities and mechanics. This homage to a classic is itself an instant classic on the Nintendo 3DS.