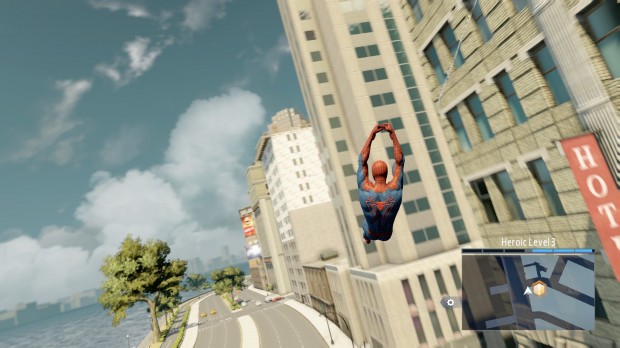 Beenox Studios, creators of past Spider-Man games such as Spider-Man: Shattered Dimensions and Spider-Man: Edge of Time, took on the task of transforming the new Amazing Spider-Man 2 film into an enjoyable video game product. Their past work gives them a solid track record with the Spider-Man franchise as Shattered Dimensions featured some intriguing mechanics and a decent combination of past Spider-Man stories. But forming a video game based off a movie is an entirely different beast, which is proven by their final product.

The Amazing Spider-Man 2 kicks off with you witnessing Uncle Ben’s death once again. This ticks off in Spider-Man’s mind that he never caught his killer, leading him on his first hunt. From here the world opens up and you begin to cruise around a decent size reimagining of New York City using Spidey’s always valuable web shooting mechanics. A vital part of any Spider-Man video game is how the developer decides to make this mechanic work. While canonically, Spider-Man uses his swinging ability by shooting web at  buildings, many games bypass that by not showing what the web sticks to, allowing you to sling web practically anywhere.

This means swinging around the city becomes much more free-form, but Beenox chose to head in the opposite direction meaning that staying below the skies and around multiple buildings is key to flawless swinging. The alternative to your traditional swinging mechanics is the ability to tap R1 which highlights a certain area in front of you, leading Spider-Man to propel himself in that direction. This is useful for getting around the environment quickly, but it never feels smooth nor quick since you are simply hammering on R1 repeatedly. On top of that, even though “technically” Spidey is using his webs to get around when you use the R1 method, nothing beats the traditional swinging around the city that everyone expects in Spider-Man. While The Amazing Spider-Man 2’s swinging has its moments, it is mostly a frustrating crap shoot of hoping that the physics work out in your favor. If they do not, you can bet that Spider-Man will not hesitate to fly directly into a wall and make the camera go haywire for a split-second.

Whether the story in a movie-based video game is a straight copy of the movie it is based on is always a topic of conversation. The Amazing Spider-Man 2 is far from the same story you see in the movie, for better or for worse. Instead, we get appearances from villains such as Kraven, Green Goblin (who is in the movie), and Black Cat. Peter Parker’s journey through his latest set of events is a sporadically paced mess. It never falls into unwatchable or confusing territory, but their constant stuffing of random villains is as equally random as it is boring.

Obviously, you are not swinging through the air the whole way through the game’s story, meaning some hand-to-hand combat is necessary. The Amazing Spider-Man 2 does what many comic book games have done here recently and ripped their combat mechanics from Batman: Arkham Asylum. As one of the enemies surrounding you is about to attack, your Spidey Senses begin to flash and you must press triangle to counter. Also thrown in are some moves such as a blast you shoot out of your hands that can help you stun larger enemies and bosses. Unfortunately, due to stilted animation and uninteresting takedowns, Spider-Man 2’s combat does not hold a candle to any of the Batman games. Your attacks boil down to simply hammering one button until you must counter, then back to hammering for a few more seconds.

Some variety is attempted to be thrown in by way of an upgrade system that allows you to boost certain aspects in Spidey’s arsenal. These aspects can range from making the aforementioned blast attack take less time to charge up to improving how quickly you shoot webs at enemies. Unfortunately, most of these upgrades do not provide enough of an incentive to worry about them, leading you to forget the upgrade path exists all together. The only additions that feel worthwhile come at the end of the upgrade paths, which is usually achieved at the very end of the game.

Of course, if you want to achieve these upgrades earlier in the game, you can always roam about New York City and take part in the wide amount of side activities available. Yet again, unfortunately, these side-missions are all too simple and repetitive to gain any worth. You have a ‘menace/heroic’ meter throughout the game, and as you complete more and more story missions, your menace section rises (for predetermined story reasons).

To lower it you must complete some of the smaller missions around the city, of which there only five or so types. These types can include rescuing people from a burning building, beating up some random thugs wearing bandoliers, to landing on a stolen car that has taken an old lady hostage in the backseat. Repeating these monotonous tasks over and over makes you feel like plunging your head into a vat of cold water just to stay awake. Apart from those instances, there are also sewers to take over (using atrocious stealth mechanics), crates to smash, and random people to photograph, among other things. While partaking in the side activities is on the level of staring at an apple in the fun department, there sure are a hell of a lot at your disposal.

Visually, The Amazing Spider-Man 2 is nothing to rave about. Spider-Man’s character model looks awkward in a very tough to describe way. His legs seem abnormally long, making him look more like a large red and blue frog than a human in a costume. The textures are not downright terrible, but they leave a ton to be desired. This is one of those products that despite it being on next-gen consoles, and you having a next-gen controller in your hands, feels like it should be releasing in the middle of the Xbox 360/PS3’s lifespan.

While a lot of The Amazing Spider-Man 2 fails to impress, there is a decent amount of potential to be had in this Beenox product. It is clear that Beenox is a talented developer, but being forced into developing a movie-game that has a predetermined release date is a near impossible situation for anyone. Here’s to hoping that brighter futures are in front of Beenox. If not, there will most certainly be a new Amazing Spider-Man heading our way in a few years.