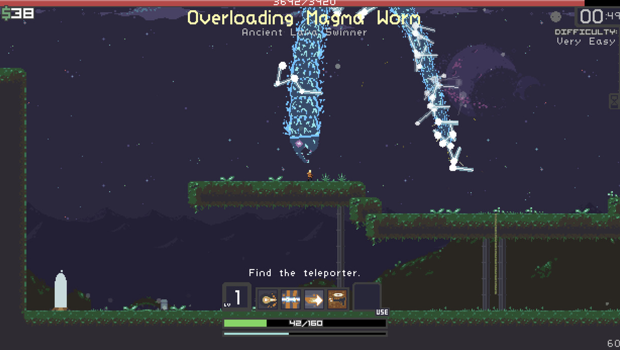 Risk of Rain combines the perma-death challenge and randomized loot of a Roguelike game with old-school sidescroller platformer mechanics, all bound together with a sci-fi and pixel art presentation. The result is an original indie experience that manages to excite and challenge the player with a fresh take on platformer gameplay, marred only by by some minor bugs. Launching at $9.99, this is a great game for anyone who’s looking for an experience broadly similar to the famous Spelunky, but set in a vastly different world with over 100 pieces of equipment to find, 10 distinct classes to unlock, and a limited co-op option on top of it all.

The story behind Risk of Rain is told largely without words, but a fair summary would be ‘a cargo ship carrying a humongous load of strange, powerful items is attacked and forced to crash land on a strange alien planet, with its sole survivor forced to find and scrounge up some of the fallen goods in order to survive and ultimately escape.’ Exactly what is going on is left a little opaque, with the story largely told in terms of the descriptions of the items and enemies you come across, imbued with the perspective of what passes for Risk of Rain’s main character. A bit thin on the narrative details, sure, but the opening movie nicely frames the game’s corus experience: the focus is on both the strange alien world, and the abundance of esoteric cargo you’ll scrounge up in order to survive your ordeal.

Gameplay is straightforward. You control a single character through a series of semi-randomized levels, killing enemies for gold and experience. You start with the commando class who has four innate abilities – a repeating horizontal shot, a piercing shot with a knockback, a diving roll that grants a speed increase and some temporarily immortality, and a burst shot which can also knockback enemies on contact. Your accumulated gold will be spent on acquiring items you come across throughout the game – chests that contain powerups for your character (largely passive, though you can have a single ‘on-use’ item at any time, often on a considerable cooldown), or repairing drones that will follow you and provide further passive attack damage or healing. During your exploration, there is also a time factor – on a normal challenge playthrough, every 5 minutes the game’s difficulty will increase somewhat, making each playthrough feel a bit urgent.

Very urgent, in fact, because the game goes with the old school Roguelike gameplay rule – if you die, you have to start from the very beginning again. Taking after games like Dead Rising and Rogue Legacy, however, Risk of Rain doesn’t necessarily send you back completely empty-handed on death. The items you’re able to come across during gameplay are often unlocked by completing some in-game challenges, such as surviving a fixed amount of time in a level, or finishing achievements for a particular class. That means that even though you’re starting over from the beginning, you have the chance to find a broader range of items during your next attempt – some of which can be really useful, and all of which come with a fun little bit of flavor-text that helps flesh out the Risk of Rain world.

Those discoverable items also provide a wide variety of distinct bonuses to your character. One may temporarily slow any enemies you hit, while another may give you the chance to fire mortar rounds in an arcing launch whenever you attack, while yet another may do a constant tick of damage to whatever enemies happen to be close to you. With over a hundred pieces of equipment to find, it would be a burden to list them all – but the important point here is that this is a reasonably diverse set of items, making each playthrough a matter of trying to play to the strength of the (largely random) items you accumulate, and doing so while keeping some constant momentum. Each level also features a random ‘boss’ mob who spawns during the mandatory countdown required to activate the teleporter to the next area, and who needs to be wiped out (along with the small army of lesser minions that spawn along with it) in order to progress. It’s not easy to balance a game with a heavy randomization component, but Risk of Rain manages to have just the right amount of punishment and opportunity present in each playthrough to make it feel like a fun challenge, rather than a complete game of chance.

Now would be a good time to take stock of the upsides of Risk of Rain: a somewhat original game, a nice old-school pixellated art style, some good music, lots to discover and explore, a reasonably balance platformer game that’s easy to learn but hard to master… there’s a lot going on here to sell a gamer, particular one with a thing for side-scrolling Roguelike challenges. Added to the list – but with a bit more hesitation – is the co-op aspect of the game. Running around with a friend is fun and hectic, but Risk of Rain doesn’t come with a server browser. Instead it’s straight back to the 1990s – you need to know the IP of who you’re connecting to (or they need to know your IP) in order to play. A bit of a hassle, but not the end of the world. The game does have some rough spots – I found the menu navigation counter-intuitive at first (particularly where pressing escape during menu navigation presented me with the option to go back to the main menu, instead of simply doing this thing), and attempting to screengrab the game caused a black-screen crash at one point. Minor points, but such problems are always worth noting. Also, I have to warn any player – the teleporter right before the final level gives you the option to randomly re-visit an older level instead of progressing, and this ‘option’ happens to be the same command you’d normally use to advance. This kind of joke – and I assume it is a joke – is irritating for a game where death is permanent and progress sometimes hard to come by. Consider yourself duly warned.