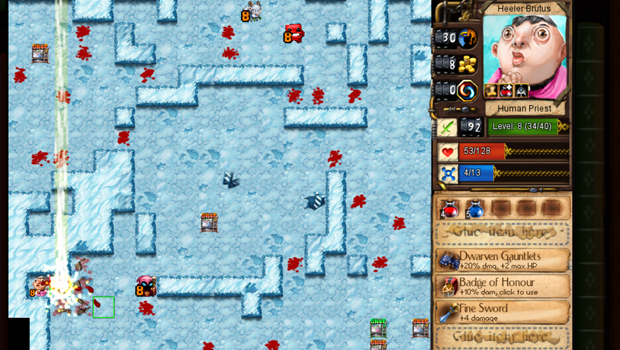 Start with all the essential ingredients to make a solid roguelike: randomly generated dungeons, multiple races, multiple classes, loot, permanent death and more. But instead of taking these individual pieces and assembling a solid dungeon-crawler out of them, do something radically different. Add in a puzzle game aspect, forcing the player to think not merely in terms of ever more powerful loot, but with an emphasis on turn-based tactical mastery where they need to plan ahead and pay attention to their every move. Do all of these things, and do them damn well. Cap it all off with a tremendous amount of unlocks, challenges, progression, and a cloud save system which gives you the option to continue your game online over the web, even on a computer where you don’t have the game installed. What I just described to you is Desktop Dungeons from QCF Designs – and it’s nothing less than an indie masterpiece.

Let’s take a step back and look at the history of this game. It originally appeared in 2010 in a kind of alpha version, and the creators have promised to allow this version to remain free to play forever – you can check it out here if you’ve never had the pleasure. It became a sensation among indie gamers, winning an award at the 13th Annual Independent Games Festival. I played it back then, and I was hooked right away – it’s extremely difficult to pull off both “original” and “fun” with the same game, but Desktop Dungeons managed, complete with what was then a cute, if minimal pixel art graphics style. Fast forward to the present day, and now what started out as a free to play indie game is on Steam, with a lot of new features and a tremendous amount of polish. In this way Desktop Dungeons mimics Spelunky – another game that started off as free and indie and eventually turned into a solid store title. The point of all this is, the fact that Desktop Dungeons is a fantastic game isn’t really news – it’s been known for a while.

[singlepic id=18253 w=620 h=350 float=center]
With the lineage of Desktop Dungeons established, let’s talk about what it really offers to the player. Much like a typical roguelike, every dungeon dive starts off with you choosing your character’s race and class, which will in turn determine the suite of largely passive abilities you’ll bring with you. From there, you’re dropped into the dungeon – usually one which takes place entirely on a single level, initially covered with a fog of war. Moving into this fog is the principal way, aside from (quite limited) potions, to restore your health and mana – immediately adding a tactical edge to the game, since unexplored spaces literally function as a precious, limited resource. As you explore, you’ll encounter monsters, each of which comes with their statistics and abilities clearly listed. None of these monsters will ever attack you of their own accord – instead, they wait for you to initiate combat. There’s very little that’s surprising about these encounters – in fact, just hovering your mouse over a monster will show you the outcome of any fight in strict numbers illustrating how much health or mana either you or your opponent lost, whether either of you would even survive the fight, and how much experience your character would gain. If you damage a monster partway and then resume exploring the dungeon, they won’t chase after you – but they will typically regain health for every space you explore. Your goal on every map is to level up, and eventually slay the boss of the dungeon, whereupon you can leave with some gold and loot to use in a future crawl.

[singlepic id=18261 w=620 h=350 float=center]
Now, it’s easy to look at the above description and come away with the impression that this is all just a typical roguelike experience like Crawl, Nethack or otherwise. Watch your health and mana, engaged in turn-based combat, try to survive, right? Well, no. What’s crucial here is that everything in Desktop Dungeons is so compressed, that your every move counts. There’s no option to rest up between encounters and take things slow – the only way to regain health or mana is to either use an appropriate potion (which are strictly limited in the dungeon, and must be found or purchased), level up (which automatically refills both mana and health), or explore the fog of war (which never refills itself.)

Likewise, monsters themselves are limited in number – meaning you can’t just grind on a perpetual stream of weak enemies to safely level yourself up. In a way, Desktop Dungeons has so streamlined the typical dungeon crawl experience that absolutely everything – from the map to the monsters themselves – function as commodities, strictly limited resources that you have to approach carefully in order to ensure success. In addition to the monsters and the fog of war, there’s also loot you’ll discover – weapons and armor that grant passive bonuses to your abilities, or glyphs that allow you to cast spells in exchange for mana. A limited inventory also forces you to pick and choose which pieces of equipment you’ll hold onto, with useless equipment able to be converted into points which in turn can grant your character a bonus depending on their race. Convert 100 points worth of loot as a human, for example, and you’ll gain a 10% bonus to your overall attack power. The point is that every choice you make in a game of Desktop Dungeons counts, and is set up in such a way to draw the player into a fluid state of tactical, puzzle-oriented thinking. It’s original, it’s fun, and there’s hardly a game like it in existence.

But all of this is just the core gameplay. What Desktop Dungeons also adds is a sense of progression, both in terms of unlocks and difficulty. While each of your dungeon dives are isolated affairs – each time you’ll start off at level 1, though you eventually have the ability to bring in several spare pieces of equipment in exchange for gold if you choose – the game still rewards you for your successes. As you successfully complete each challenge, you’ll not only unlock new stages, but also earn gold that can be spent on upgrading your cozy little home town with new buildings which reward you with new classes (16 total), races (11 total) and more. What’s more, as you unlock these new races and classes and buildings, you’ll also unlock new monsters that will appear in the dungeon – each typically coming armed with a new, unique ability that will add yet another tactical consideration to your dungeon crawl experiences. What all this means is that Desktop Dungeons is absolutely overflowing with unlocks – new challenges, new bonuses, new dungeons, new modifiers to each dungeon, and more – an incredible combination of options that gives the entire game a tremendous amount of replay value, making it last vastly beyond the game’s initial campaign.

For those of you who have already played the free alpha, you’re probably wondering what the Steam version of Desktop Dungeons gives over and above that original iteration. The answer is: quite a lot. First there’s the graphics overhaul, shifting Desktop Dungeons from a pixel art affair to a far more polished fantasy-styled 2D art appearance, alongside some great mood-setting music. Graphically, I don’t think there’s a single thing left over from the original alpha game – everything from the tiles to the opening screen is new – even if all of the gameplay elements remain largely the same. In addition to the audio and visual changes, there are also an abundance of new gameplay elements that go beyond the aforementioned modifiers and challenges. There are now strict and hand-crafted puzzles that can be unlocked and challenged in sets, putting far more of an emphasis on the brain-teaser aspect of Desktop Dungeons’ gameplay. Further, each class in the game comes with a trio of progressively more difficult challenge stages, each featuring a dungeon customized for that particular class’ unique set of abilities. Between the customization options, the funny campaign, the puzzles, the unlocks and the achievements, this is a game that has well earned its retail price – the additions are not merely cosmetic.

But there’s one more thing that sets Desktop Dungeons apart from the pack: its cloud-save and remote play feature. By making an account at desktopdungeons.net and linking your Steam account to it, you’ll get the ability to play Desktop Dungeons via a browser – even on a computer where you don’t have the game (or Steam, for that matter) installed. This isn’t a ‘lite’ version of Desktop Dungeons either – this is the same game, using your very own save, thanks to that aforementioned cloud-save feature. For anyone who often finds themselves on the go and using other computers – say, at internet cafes, or in university computer labs, or when visiting relatives or otherwise – this is tremendously convenient, and not exactly a very common feature. I gave this a spin myself through my PC desktop browser, and found everything running smoothly, complete with a flawless loading of my own save. The very turn-based nature of Desktop Dungeons makes it so lag issues are more or less non-existent – it’s a golden feature, and adds yet more value to the title.

At $14.99 on Steam, Desktop Dungeons isn’t just a solid roguelike game, or a worthy puzzle game. It’s a fantastic, unique title that manages to bring something new to the dungeon crawl genre, and do it with excellence. If you’re at all a fan of tactical, puzzle-centric thinking or turn-based dungeon dives with an emphasis on quick playthroughs, unlocks and dynamically generated challenges, grab this one as soon as your wallet permits.

One of the best games to come out of the indie dev scene in recent years, Desktop Dungeons takes the best aspects of a roguelike dungeon crawl, distills them down to the essentials, and puts a tactical, puzzle-minded spin on the genre that is not only unique, but brilliantly executed.