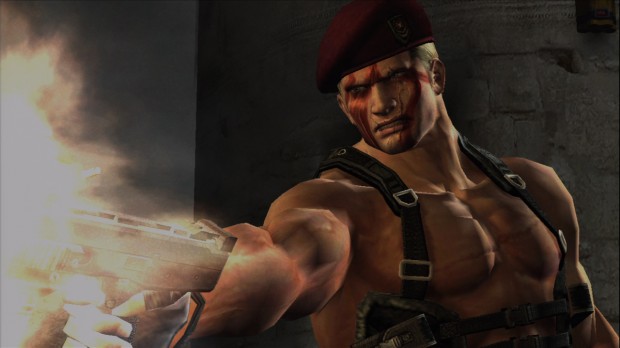 When you think of third-person shooters, it is hard not to immediately think back to Resident Evil 4 as being one of the most influential video games within the genre. It standardized the control set and paved the way for plenty of fantastic games that launched after the games original January 11th, 2005 release date. This brings up the question, years later, does the game still hold up? It’s clear that Capcom thinks so as they have released Resident Evil 4 on a multitude of platforms since 2005, including the Wii, PS3, and Xbox 360. In probably its final release, they have brought an all prettied up HD version to Steam. But can a game that is over 9 years old still be worth your money?

You begin Resident Evil 4 as, you guessed it, Leon S. Kennedy. Leon is a man on a mission, quite literally, as he is being sent to Europe to find the president of the United States’ daughter. The president’s daughter, Ashley, has been captured by a creepy cult called Los Illuminados which ends up being the proprietor for the many zombies you plow through in your path to the end of Resident Evil 4. As you would expect, the story is the same as previous iterations, meaning that it continues to be an afterthought in the grand scheme of things.

It features the same characters, Ada, Leon, etc. but the general plotting of the story is nothing to get excited about. It goes through its basic Hollywood-esque tropes, damsel is taken by bad guy, good guy makes witty remarks and does anything to complete his job, etc. Thankfully, the creepy villains in the game keep up enough interest to stop you from snoozing off. It isn’t just their insane personalities but also the design of their characters. Designs such as Ramon Salazar, a guy who is as dangerous as he is small, elicit an uneasy feeling due to the detail put into every inch of his creation. His purple robe matches his boisterous yet insane personality, which is only heightened by the fantastic voice work performed by Rene Mujica.

Rene Mujica does not deliver the only solid performance as all the voice work within Resident Evil 4 remains top notch. Finding a dry line read from the script is like trying to find a needle in a haystack. The actual sound design is on par with the voice actor’s performances. Weapons fire with a certain pop that you expect, a pop that has become associated with the Resident Evil franchise. For example, there are few shotguns with as recognizable a fire and reload noise as the one in Resident Evil. It’s a noise you hear and never forget, which is the epitome of great sound design.

The biggest addition to this port of Resident Evil 4 are the updated HD graphics, which hit you in full force. To be fair, Resident Evil 4 was a very visually impressive game upon its release nine years ago. But, as I said, that was NINE years ago. Despite it being created before we took part in such great shows as Breaking Bad and Mad Men, Capcom has managed to beef up Resident Evil’s visuals enough to still impress you at every turn. It’s clear that some of the textures have aged, that’s inevitable, but the sheer art available for our viewing pleasure is still absolutely beautiful. These amplified graphics have made a game released in 2005 look better than most games released in 2010.

Great sound design and distinct character models are not the only thing the Resident Evil series has become known for. On top of that, many recognize the old-school, slow, plodding movement of the main character. This is a design choice introduced originally because it added an intensity to the combat, which it still manages to do. There’s no doubt that it can sometimes add a layer of frustration, but it definitely helps more than it hurts. One of the bigger issues is the old-school save system based around reaching typewriters and saving your progress. This means that there is no autosave, so if the game or your PC crashes and you have not saved recently, you are going to be one frustrated consumer.

Also still in full effect is the grid-focused “Tetris” style inventory system which forces you to fit your items into a case of a certain size. This can mean rotating items and moving them around just to figure out how to place all your items within your allotted space. It’s a frustrating part of Resident Evil 4 that was not feasibly possible to correct in this Steam port of the game, but that does not lighten the annoyance it brings. Speaking of annoyance, puzzles still exist within the Resident Evil 4 world and they remain as frustrating as ever. Not only are they unnecessarily difficult, they feel out of place and break the pacing of the action. Do not get me wrong, I do not know the Los Illuminados cult personally, but I suspect they would not lock doors using fun little slide puzzles. Those are reserved solely for their break room and late-night escapades.

Resident Evil 4 was a monumental achievement upon its release back in January 2005, and it is still one that video game connoisseurs appreciate today. What many of these connoisseurs forget is just how well the game holds up nine years later. Sure, it has frustrating elements that can throw you off your positive momentum, but the strong elements of the landmark release that was Resident Evil 4 still stand tall today. In all honesty, it just feels nice to play a great Resident Evil game, even if it is nine years old.