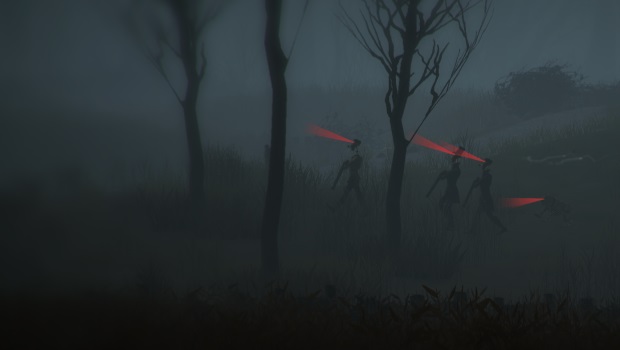 Sometimes being charming just isn’t enough. In Sir, You Are Being Hunted, you will be chased by robot dogs that say, “Woof, woof, bark,” rather than actually barking; you will loot an endless series of houses in search for that elixir of life, lukewarm tea; and you will narrowly avoid robot men whose comment upon losing sight of you will be, “We’ve lost the blighter. Oh dear.” Sir is the kind of game where you stop to read the road signs, just to see what kind of insanity they contain. But it is also just a bit dull.

Sir, the first-person stealth game from Big Robot, a new indie game studio formed by Jim Rossingol of Rock, Paper, Shotgun, is at its core a game about survival. This is not an open-ended goal, however, as Sir has a clear and immediate objective: your character has been teleported to an alternate-universe Britain, and you must collect 17 fragments of a device scattered across five procedurally generated islands that, when combined at a standing stone in the central island, will send you home. This would be rather straightforward, of course, were you not being hunted by all manner of homicidal robots and starving to death.

Effective use of stealth will be critical to acquire the tools and food you’ll need to make it across the islands in search of the missing fragments, even once you have obtained weapons. Fights will not usually be won by charging into a clearing blindly, especially since it seems like most robot hunting parties travel with more members than you first assume. Darkness will be your ally – so much so that daytime can be more frightening than night in Sir. Moving stealthily is slow, however, and the islands of Sir are big. When most islands contain only three fragments, each of which must be manually sought by deliberately searching the whole of the island, it is easy to spend fifteen or twenty minutes at a time just wandering an island, not finding any new tools, not encountering any robots, and most frustratingly, not finding any device fragments. After about seven hours in the game, I finally discovered that the will-o’-the-wisps that periodically appear in the world will eventually guide you to fragments – although often by way of a hunting party.

This is survival in Sir, You Are Being Hunted: looting food from doors to houses that you can’t actually go into; walking away from your computer during the day cycle of the islands so that when you return you’ll have the advantage of night; and sneaking up behind a robot in tall grass to give him both barrels of shotgun at point blank, because the gunplay mechanics are otherwise clunky and unreliable. Tension is key to making the battle for survival meaningful – in the early game it may be difficult to find and acquire fragments when you have no map and distraction is your only weapon, and ammo tends to be scarce throughout the duration of the game. However, once a baseline amount of gear is acquired, the only real tension to Sir is the fear that you’ll get jumped by a hunting party before you have a chance to run device fragments back to one of the inconveniently located save points. That and realizing you’re going to starve to death even though you have a backpack full of food, because there is no audio warning or notification beyond the vitality meter reaching zero, which I hardly ever looked at because food was just so easy to come by.

I have to believe that the design decisions in Sir were made out of an attempt to present a streamlined experience, but to me the experience instead just feels thin. Unlike most other survival games, there is no crafting component, which means that downtime in Sir is deeply unengaging. There are no side-quests or secondary objectives. The amount of useful loot is small enough that past the initial search for the bare necessities, there is no longer a pressing need to search for more. There are a handful of rare and unique items in the game, but after a while I found it most straightforward to simply focus on ammo, food, and bandages, because I was just so bored wandering the map looking for rare goods.

For gamers who like exploring systems, who want to take the time to set the perfect robot trap using a choo choo train, a couple of sticks of dynamite, and an empty sherry bottle, the charming world of Sir may hold some interest. But given the size of that world relative to its lack of gameplay depth, Sir, You Are Being Hunted feels a bit like its starving, only it just hasn’t realized it yet.

After eight months in Steam Early Access, Sir, You Are Being Hunted is out of beta. Unfortunately, it still feels a little under-baked. There isn’t enough content or complexity here to warrant Sir’s length on a single playthrough, let alone on multiple playthroughs. Sir, You Are Being Hunted has a delightful sense of humor, but it’s just not enough to carry the rest of the experience.