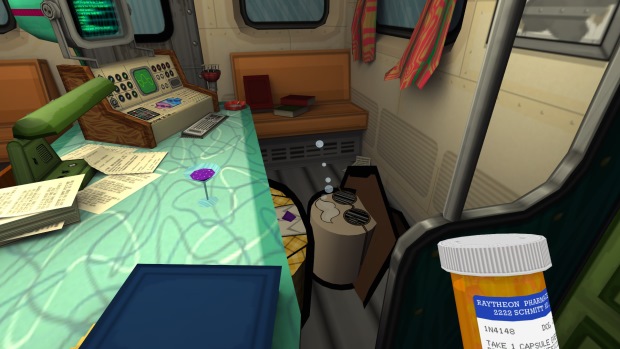 Indie developer Necrophone Games has put together Jazzpunk – a darling little title that offers you the chance to explore a world crafted by one part tribute to computer-inspired pop culture mixed with two parts irreverent humour. Available on Steam, I’m reticent to share too much of the storyline since it would spoil your experience.

[singlepic id=18002 w=620 h=350 float=center]Basically, you play a human agent working for what seems to be a government spy agency, running missions through drug-induced level design. The world is predominantly electronic, and most people you meet are not human. As an exploration game, don’t hold your breath for decent combat or an engaging storyline. In Jazzpunk, there is no big punchline to wait for – instead they’re all over the place.

[singlepic id=18003 w=620 h=350 float=center]Controls are pretty basic and work on either keyboard/mouse or controller. Walking, jumping, switching items and interacting with the environment are very basic. You’re given clues as to what you can touch by way of a dotted circle around the item or device. The game uses full voice, however text is also placed between you and the person speaking. In some cases the voices are nonsensical, and reading the text is a must.

While finding objects, completing quests and exploring the environments to move the story forward, there are too many pop culture references to count. Tributes to Street Fighter II, Quake, James Bond, Evil Dead and a disturbing number of hobo makeout scenes will pelt your senses. The exotic rhythm and the 60’s vibe suits the simple polygonic shapes and flat textures. Rather than coming off as cheap, it strings itself well together in an oddly consistent presentation.

[singlepic id=18006 w=620 h=350 float=center]Were I to heap upon it criticism, it would be based on engagement, length, and depth. The story does work, but as it progresses it begins to simply show up, rather than drive curiosity that the first two levels excite. It also doesn’t take all that long to complete, though if you’re rushing through it you’ve already missed the point.

Jazzpunk is an odd flavour that needs patience to enjoy. It also attacks you with puns and references to things often too old for younger audiences – but it is also a game that can be played with an audience – in fact, the term “game” may be too limiting for this particular title. It is a story told through exploring, and while it could have come off as cheesy it straddles the line between convincing and inane surprisingly well.[singlepic id=18004 w=620 h=350 float=center]

Necrophone Games has a fantastic premise, a decent execution and a brave narration in Jazzpunk. Had I not had the pressure of trying to get through this for the purpose of review, I would have had far more laugh-out-loud moments, rather than a quick acknowledgements and the occasional laugh. At $15, there is some quality time you can get with this indie Steam title. Watch the trailer - if you’re even the least bit curious, I say go for it.

Earlier this year, we reviewed Gears Tactics for PC, most of which is applicable to the Xbox Series X/S versions. You can...