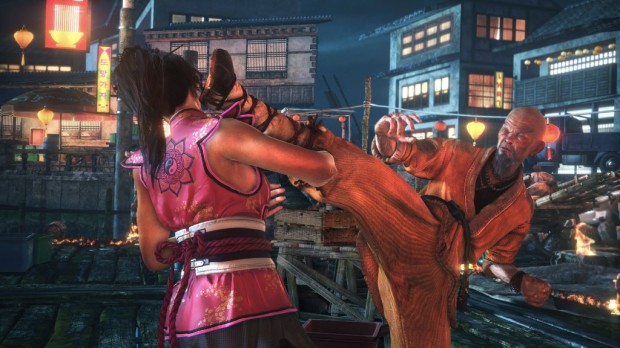 In the seventh console generation we saw an increased focus on motion controls, but the hardware just wasn’t capable of the 1:1 translation from movement to screen that gamers would expect, and many games required.  There were just under 100 games released that required Kinect, but only a few of them had great measures of success including Just Dance, the Dance Central series, and UFC Personal Trainer.  Most games were simply sub par or broken with an average falling below 50%.  Put simply, the Kinect hardware couldn’t keep up with what programmers were trying to do with it, and the products suffered for it.  The 1080p lens and incredible fidelity of Kinect 2.0 on the promise made by its predecessor…right?

Developer Daoka, a freshly built studio made from much of the talent behind the action/adventure title Outcast, took on Ubisoft’s exclusive Kinect title Fighter Within as their first AAA game.  It would bring martial arts and motion controls together in a high-paced fighting title that would have gamers on their feet, punching and kicking in what would be a new IP for Ubisoft.

After a required 3GB patch I installed the 9.2GB of data to the hard drive.  I lost track of time, but I did manage to read several chapters of a good book before it was fully installed and ready to play.  I launched the game and it immediately crashed the system.  A quick reboot later and it was off to the races, albeit with a bit of a rough start.

With a Kinect title of this nature, I shouldn’t need to play a tutorial, but I did just the same to see what special moves or powers my fighter could unleash.  The Kinect translated my punches into action on the screen, and pulling my hands up in front of me shielded me from higher incoming blows.  Kicking, as poor of form as it is (why are you dropping your guard hand? Turn your hip!) is also not completely awful, but it’s from this point on that everything fell apart.

I’ve been in martial arts since I was three.  I’ve trained hundreds of students and a few years ago was honored to test in front of the Grandmaster of my style and receive my Master rank.  But most people are not like me.  Most people have never thrown a punch or a kick, most people don’t have fighting skills, and I couldn’t expect Daoka to create a game with such a limited niche appeal.  I set aside my skills and came at this title as a novice would.

The mechanics beyond the three I’ve already described were clearly created by people who have never even seen a fight.  Throws are represented by putting your hands in front of you, one above the other, as if reaching for a broom.  Leaning back will cause your fighter to move backwards, though even the previous Kinect generation was capable of interpreting forward and backward movement. It would have made more sense to have leaning backwards translate to…oh, I don’t know…leaning backward.  To prevent being thrown you simply pull your guard completely, lowering your fists somewhere between your chest and your waist.  I’m not sure how you are expected to block anything by dropping your guard completely, but that’s what Fighter Within commands you to do.  Hooks would be a solid method of hitting your opponent around their guard, but I rarely got the Kinect to recognize the difference between a jab and a right cross.  A low counter is performed by first blocking (by dropping your guard) and then kicking.  The vast majority of the time this was misinterpreted by the game, opening your fighter to counters instead.  You can charge your Ki by leaning back and raising your fists – that is, if the game doesn’t instead have you jump backwards instead of charging.  The most egregious and contrary motion of them all, however, is the high counter.  First you block by raising your hands in front of your face, and then you duck down and punch.  Fighter Within has a great deal of difficulty with this move – as did I as it makes no sense.  What comes out of your fighter makes even less sense as the game often translated my movements into a goofy punch to the gut or kick to the legs.  It feels unnatural, it looks unnatural, and it simply doesn’t work.

You can turn on ghost mode to help you match your gestures with the counter intuitive actions the game is asking of you.  This setting puts a small fighter on the screen to show you what it thinks you are doing wrong.  It’s infuriating as you are often doing exactly what you are told.  I recalibrated the Kinect to make sure it was set up correctly, but Just Dance 2014 works perfectly.  Frustrating as that is, the menu system screams last-gen as loudly as possible.  Swiping around menus like Minority Report would have been awesome, but instead we are asked to hold our hand over a selection and then push your hand toward the screen, then pull it back without moving your hand in any other direction.  It worked as well as the controls I just mentioned, leaving me with a controller in hand in short order.

Fighter Within is gorgeous to look at, even if it falls face-first into the tropes of any martial arts fighting game.  The whiny main character, the old man, the tattooed dark hero, the tribesman and tribeswoman, the hipster, the Wesley Snipes knockoff, and the blonde that looks like she’s headed to her job at the strip club with how open her uniform is, all look fantastic flexing the considerable amount of muscle in the Xbox One nicely.  Each environment looks better than the last, and the cuts and scrapes on your fighter are pretty well done.  Now if only these beautifully rendered fighters would shut their mouths.

Great voice work has become the norm nowadays.  You don’t need Patrick Stewart, Jennifer Hale, and Nolan North in your game to make it great, but it doesn’t exactly take a trained ear to hear when voice work and poor writing have come together to make something that makes the 1998 Mathew Broderick remake of Godzilla look like a cinematic masterpiece.  Stiff and deadpan execution of poorly written dialogue give us a better reason to say “Xbox, record that” than any fighting on the screen.  Stupid statements like “each to his own weapons”, and “The only freedom is the fight to conquer for freedom” will have you laughing until the next stilted and unconnected dumb statement.  Fighter Within’s attempt at deep and meaningful dialogue is not unlike a game of telephone where you are a third party getting even less than every other sentence.

It’s with a heavy heart that I write this review of Fighter Within. When I saw the announcement, I was excited, knowing what the Xbox One Kinect could do for a genre like this. Daoka bit off far more than they could chew, and this time it wasn’t the hardware. The Kinect was purpose built for exactly this sort of game, but Daoka simply wasn’t up to the task. As a fighter and a gamer, I’m deeply insulted by Fighter Within.