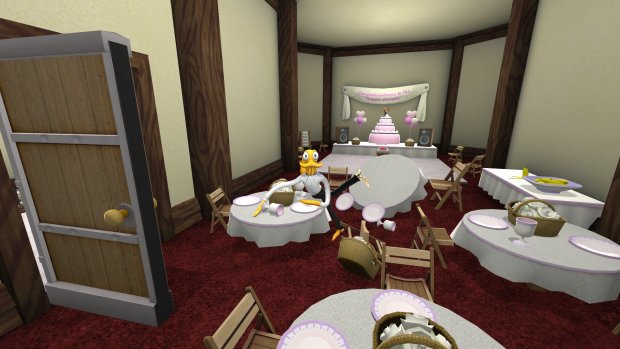 I am an impostor.

My friends, my family, even the people I meet day to day don’t know who I really am. I try to fit in as best as I can, flopping around, fumbling through basic tasks. I’ve been able to hold it together for this long, but the fact remains: I’m a fraud in a three-piece suit. Such is life as an octopus.

Octodad: Dadliest Catch follows this joke to its logical conclusion and then some. You play as the titular octopus, a loving husband and father of two human children. Never mind the logistics of how such a thing would work; it just does. You just want to live a human life, doing dadly things — play with your kids, mow the lawn, barbecue. Life is as good as an octopus masquerading as a human could have it — if it weren’t for an obsessed chef, whose singular goal in life is to expose you to the world, then turn you into sushi.

It’s hard to get comedy right — especially in a video game. Usually, games tend to come up with one or two great jokes and wear them into the ground; and to an extent, Octodad is basically one gag (gee, wouldn’t it be absolutely ridonkulous if an octopus tried to act like a human?). But from the opening moments where you’re getting ready for your own wedding, to later bits where you’re drunkenly knocking every item ever off grocery store shelves, Octodad never ceases to put a gigantic smirk on your face.

Octodad’s humor works because it’s hilariously frustrating to play. It would make sense that an octopus posing as a human would have difficulty performing simple, everyday tasks, and this translates directly to the controls. I played Octodad using a controller, and it’s a downright triumph to succeed at walking, let alone doing anything complex. Your arms are mapped to two analog sticks — one raises your arm up and down, while the other moves it in and out — while the two triggers move each individual leg. This transforms simple actions like buying groceries or mowing the lawn into huge, overblown ordeals. You’ll reach your arm to pick up a single object and your appendages will flail around, smacking everything within reach, leaving giant piles of junk in your wake. You have to be careful with how much of a mess you make, otherwise your ruse will fall apart like the metaphorical house of cards you stumbled into.

You’d think the joke would grow tired after a while, that you’d get sick of dealing with this floppy, drunken octopus. Later stages involving stealth will definitely try your patience, and the camera tends to get in the way more often than not. But for every moment where you’re cursing under your breath from the frustrating level design, there are ten where you’re chuckling with delight at this dumb octopus knocking around dumb stuff in this dumb game.

While maneuvering this cephalopod through these mundane tasks makes up the brunt of Octodad’s humor, the dialog really ties everything together. Everyone buys into your disguise without question. You’re just another human being to them, moving about your day, despite your constant blurbles and gargled responses to their inquiries — and the subtitles add oddly specific context to your emphatic gurglings. In-jokes abound, the plot is suitably ridiculous — there’s nothing about Octodad that takes itself seriously.

Just when you get invested in Octodad’s brand of stupidity, and just when you get the hang of the more difficult and frustrating stealth sections, it’s all over. I cleared the entire game in just under two hours. There are hidden items to find in each level, as well as a whole slew of special achievements and a ridiculous co-op mode (each player controls an individual octopus limb), and even Steam Workshop support. I just wish there was more to do within the framework of Octodad’s hilariously dumb narrative.

And Octodad: Dadliest Catch is super dumb; probably the dumbest game I’ve ever played. But that’s what makes it endearing. It’s not the prettiest game, its controls are purposely obtuse, the stealth sections are frustrating and out of place, and the camera will fight you every step of the way. But damn, if it isn’t the funniest, stupidest, most ridiculous game I’ve ever played. If we’re looking at a laugh-per-dollar scale, Octodad: Dadliest Catch is worth every penny.

Octodad: Dadliest Catch may be a one-joke game, but the team at Young Horses has taken that joke and squeezed as much hilarity out of it as possible. Don’t ask questions about the man in the suit -- just buy the game.