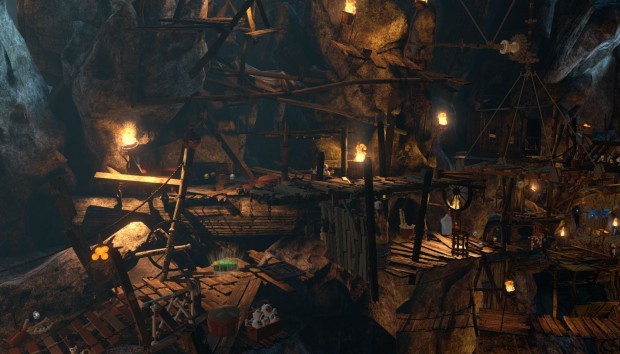 LEGO games have been a staple in the gaming world for a long time now, to the point where I find myself more surprised when a major motion picture DOESN’T get a LEGO retelling than when it does. So it is no surprise that The Hobbit movies are getting one with LEGO The Hobbit, which visits the first two entries of Peter Jackson’s The Hobbit trilogy. LEGO The Hobbit doesn’t deviate much from previous games, but is a solid title for fans that have come to expect a humorous recreation of their favorite stories in LEGO form.

LEGO The Hobbit follows in the footsteps of its predecessors as a farcical adventure game with button-mashing combat sequences. Although some gameplay elements are added, such as rhythm-based musical sequences and a brand-new item creation system, the title is by-and-large what fans have come to expect from the series. Players take on the role of Bilbo Baggins and the merry band of dwarves in his company, as well as various other characters involved in the events of The Hobbit.

As usual all of the characters in LEGO The Hobbit have different abilities that force characters to make use of the whole party, which is good because having so many bearded dwarves in your group at once is confusing as hell, but also makes solving puzzles a series of monotonous character-swapping. The combat is also largely unchanged and not very challenging, as it amounts to button mashing. Playing through the campaign, however is still good fun, as the expert humor and wit of the LEGO team shines particularly bright in this title.

LEGO The Hobbit also looks better than any title that has come before it, as environments have been painstakingly recreated from the film. An improved variety of textures makes action sequences, like a crumbling building look almost as great as their live-action counterparts. The music and voice-acting, which has all been imported directly from the films is way too grandiose to fit in with this title, which makes it all the more hilarious. Hearing Oakenshield cry out in pain that has been lip-synced to a silly LEGO character never gets old and is one of the game’s highlights.

This title is probably one of the series’ biggest undertakings with a huge roster of characters, near-endless side-quests, and a robust main story. Certain aspects of the game are a little tedious, like the grinding for resources to create new items, and the endless search for more LEGO studs that is present in every LEGO game to date, but more content is rarely a bad thing, and LEGO The Hobbit deserves credit in that regard.

The biggest drawback of LEGO The Hobbit is that it lacks originality. This is the third LEGO title that has come out this year (and it’s only April), so by now the standard formula has become a little exhausted. Additionally, since this game follows The Hobbit films so closely it retreads old ground, whereas some more recent LEGO titles such as LEGO Marvel and LEGO City Undercover tell unique stories quite well. The new gameplay elements are a welcome change and certainly break up monotony, but I can only play so many LEGO games before it becomes stale.

LEGO The Hobbit also tells an incomplete story. Since it covers the first two Hobbit films and ends on the same cliffhanger as said films, it leaves the player wanting more and frustrated at the lack of resolution. The plan is to release DLC to incorporate the third film after it’s released later this year. It seems like they either should have waited for all of the movies to come out and made one game or made a game for each film, but making a game 66% of the way through seems like a weird decision. This isn’t really important at all, but it annoys me enough to warrant mentioning.

LEGO The Hobbit is what everyone expected, which can be good or bad depending on your exposure to the series. There is plenty to enjoy here for Middle-Earth fans, children, and those who haven’t been burnt out yet by the series, but for those who were hoping for a fresh take on the LEGO video game experience there are few unique experiences to be had.