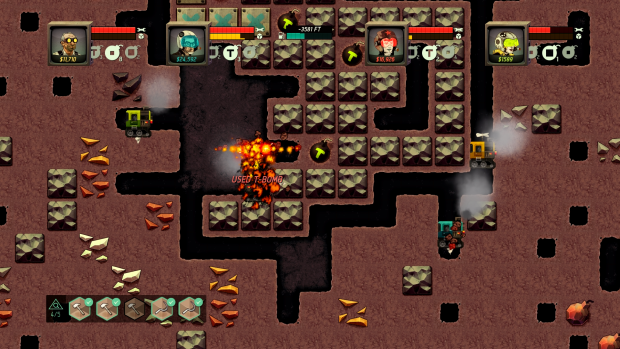 Something roils beneath the Martian surface. Something ominous. It nags at your every thought as you delve deep beneath its crust, searching for valuable minerals to take back to Earth. Remnants of previous expeditions await as you progress further, their pre-recorded messages haunting you, the harbinger of some great evil.

But you keep digging. You have no choice. It’s your job.

Super Motherload is XGen Studios’ follow-up to Flash-based time-waster Motherload, and what a follow-up it is. The basic gameplay is the same; dig for minerals of increasing value until you run out of fuel, head back to the surface and use the money you get to buy more upgrades. Progress further underground, get more money, get more upgrades. Repeat until you beat the game. There are no enemies (save for the final boss), and no real conflict — it’s just you versus the elements.

This sounds about as exciting as watching paint dry, but describing it in such reductive terms does Super Motherload a disservice. There’s something oddly compelling about trying to snatch up as many minerals as you can before you run out of fuel, and watching your digging machine slowly but surely grow into this unstoppable harvester is highly rewarding.

Digging for silver, gold, and Unobtanium may get repetitive after a while, but Super Motherload takes a few steps to make sure that it doesn’t get too monotonous. One of the upgrades you can buy early on allows you to smelt minerals — essentially combining the last two minerals you collected into a better result. This simple addition transforms Super Motherload from a simplistic and mindless time-waster to a thoughtful puzzler, as you figure out the most efficient way to collect the red planet’s bounty for maximum profit.

You can also collect a variety of bombs with varying blast radii, and use them in conjunction to solve its trickiest puzzles in order to grab the most valuable resources and quest items. You’ll constantly feel compelled to go on one more run into the depths of the Martian surface, grab one more upgrade before you quit, discover one more secret — and suddenly it’s way past your bedtime.

The gameplay may be addicting, but it’s the surrounding details that elevate Super Motherload beyond its humble flash roots. The 1960s Cold War-inspired graphics are simple, yet effective at conveying the mood. The retro-inspired music is catchy as hell, and one of the best I’ve listened to since Hotline Miami. The plot isn’t very deep, but it adds just enough to provide some excellent atmosphere to an already great looking and sounding game. Add in four-player local co-op (nothing online, unfortunately), a landscape that changes with each new game, and a hardcore mode where even running out of fuel spells instant and permanent death, and you’ve got a fairly deep game that belies its simplistic roots.

Super Motherload may not be the most action-packed or technically impressive game on the PlayStation 4, but what it does offer is surprisingly addictive, especially for a game entirely about digging. Puzzles, strategy, multiplayer, a haunting atmosphere, and a fantastic soundtrack -- Super Motherload packs a wealth of material into a small, though somewhat repetitive, package.