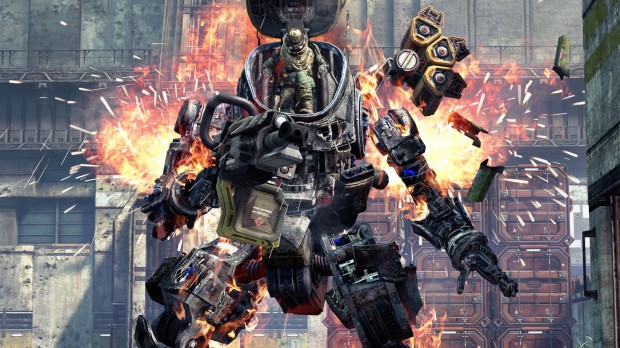 Titanfall. The game that will fix the lagging Xbox One system sales. The game that will replace Call of Duty and take its shooter crown. The game that tops everyone’s most-anticipated list. There are few titles with as much hype, but could this behemoth-sized battler live up to the lofty expectations that gamers have placed upon it? We prepared for Titanfall and dropped in to find out.

The first and most immediate question on everyone’s mind is “Is Titanfall simply Call of Duty with Mechs?”, and thankfully the answer is slightly more complicated than that. A more apt comparison would be an amalgamation of Tribes, Call of Duty, Mechwarrior, and Shogo: Mobile Armor Division, but somehow far more accessible than any of them. Titanfall indoctrinates new pilots with 14 basic tutorials, showing you how to perform wall runs, sprinting, double jumping, and how to use the smart pistol. It also gives you your first taste of Titan piloting and combat, though this 20 minute utility gives you the bare minimum to try your hand at the real thing.

There is no traditional single player game to be had here, but that isn’t to say there isn’t a story. This narrative feigns depth by staging the IMC as an evil corporation with deep pockets that has risen to power through application of force, squaring off against the Frontier Militia – the ragtag group of homesteaders and colonists scrounging for any fuel, weapons and other precious resources in their war to simply stay alive. Starting off on the Frontier Militia side you’ll complete 9 missions, then switch sides and play as IMC to see things from their perspective for another 9. Dropships will fall out of the sky, leaders will shout inspiring words, and you’ll swat bots and players by the dozens – you’ve seen this before, but the gameplay makes it all feel new again.

Titanfall features six mission modes – Attrition (better known as Team Deathmatch), Hardpoint Domination (aka Capture and Hold), Last Titan Standing (you get one life and one Titan per round), Pilot Hunter (take out the enemy pilots to win – you can drop Titans, but only pilot kills count), Capture the Flag, and Variety Pack which gives you a mixture of all of the previous items.

If there was one thing that the prior tenants of Infinity Ward were good at, it was game balance. Since those players are now manning the halls of Respawn Entertainment, you can rest easy that Titanfall is a well-balanced game. As there are thankfully far less weapons to juggle for your Pilots, knowing how to use them effectively becomes more important. Similarly, there are only three Titan types – Ogre, Stryder, and Atlas. The Stryder is your nimble fast-attack Titan, the Atlas is your well-rounded fighter, and the Ogre is the slowest moving heavy hitter amongst the trio. Each Titan has a weapon loudout that matches their role, though you can rearrange that loadout when you hit level 10. They also have a special kit that allows them to catch incoming ordinance and hurl it back, drop a non-portable shield that you can fire through but will absorb enemy fire, or drop an electrified blanket of smoke that will electrify and destroy titans and pilots alike. All three also have a specialized core that allows them to do additional damage, absorb more damage with their shields, or have infinite dashing abilities, depending on your loadout. These hulking behemoths can turn the tide of battle…but they are a little more fragile than you might think.

While a Titan can obliterate an enemy pilot with a single salvo from their oversized weapons, they take almost no damage from small arms fire. Thankfully every pilot also has an anti-Titan weapon at their disposal. Either peppering the enemy, or locking on with a single rocket, a coordinated attack from one or two pilots can take down another Titan rapidly. You also have the opportunity (and I encourage you to – it’s very cool) to “Rodeo” a Titan, leaping onto its back to rip open a panel and blasting away at the innards. Conversely, the Titan pilot can jump out of the beast and target the rogue rider. All in all, it’s a lot to take in but intuitive enough to not overwhelm new players.

The game, whether you are playing Classic or Campaign it’s a 6v6 battle system, with bots to add to the fray. The bots aren’t going to blow you away with their amazing AI, but if you aren’t paying attention they will gang up and kill you. Taking them out reduces the clock by a set amount of seconds, and since you can only bring a Titan onto the battlefield every two minutes, you just might find yourself hunting them down to accelerate that.

The big modifier, beyond the giant stompy robots, are Burn Cards. Burn Cards are a single-use item that can turn the tide of battle. There are over 50 cards (so far), but you can only hold 25, encouraging you to use them instead of stockpiling. These can be equipped in up to three slots (unlocking between level 7 and 11) before battle and provide boosts like dropping in a Titan instantly, faster movement speeds, double XP, or longer lasting cloaking ability. Burn card effects only work until you are killed, so use them judiciously but frequently.

Titanfall has only been out for a few days, and I wanted to wait and see how the game performed with players and not just press and developers at the helm. Interesting tactics have begun to emerge, with my last few matches being especially interesting. On some Hardpoint Domination maps it made more sense to step out of your Titan and put it in a Guard or Follow state while using the superior agility of jump kits to dive into the interiors of buildings. Using the Titan as a distraction still earns player experience, acting as a mobile turret and a seventh player on your team. Additionally, despite the vast player load of the last two days this has been a very smooth launch. I’ve experienced zero lag-related issues, and have had no problems with matchmaking. As more players jump in we’ll see a more balanced level matching during play, I’m sure.

The hitch to all of these modes and match options is that they are too few and don’t carry enough variety. The modes are tried and true, and adding giant robots to them doesn’t change the formula enough to not eventually feel a little too familiar. I’m hoping that Respawn doesn’t start selling us new game modes that should have been included on the disc and passing it off as DLC.

The Xbox One version of Titanfall runs at 792p upscaled to 1080p, though lead engineer Richard Baker stated that the game could possibly receive a patch moving the resolution up to 900p with FXAA or 1080p without anti-aliasing. As it stands, there are occasional framerate and texture tearing issues when the action gets fast and furious, but it doesn’t stop this game from looking gorgeous most of the time. The silky smooth 60fps promises made early on don’t quite hold up on the Xbox One though – I’ve seen it drop down into the teens. Thankfully that’s a rather infrequent problem. There is a UX/UI problem here though – all of the story is told via voiceovers and little pop-up windows that are trying to convey context to the chaos during intense battles, of which the audio is often drowned out by clanking and gunfire. Additionally, these story elements can be cut short as objective pop-ups, your faction leader talking to you via a heads-up display, or literally anything else can interrupt it. Often you’ll be getting some backstory on what you are trying to accomplish just as a map ends, lopping off at least half of it.

The other odd omissions caught me completely off guard, given the pedigree and previous titles that these developers have delivered. While you can invite your friends to your current game, there is no method to gather a full cadre of 12 friends to enjoy squaring off against people that will actually coordinate together. Similarly, there is no mechanism to vote for new maps, kick abusive players, or even name your custom loadouts as of now. Literally any shooter in the last decade has had these options as a standard, so it’s surprising to see a next-gen title miss the customization mark.

Answering the question of whether Titanfall lives up to the incredible amount of hype and anticipation is something that’ll take a little bit more time. It’s fun, damned fun, but the lack of single-player campaign, customization, and matchmaking options come as a bit of a surprise. What amazed me most though is what is layered throughout - accessibility. Titanfall makes every player feel like they have a role to play. Even if you are just crushing bots underfoot, you feel like a badass in a giant walking tank every second of play - I just wish there was more of it.