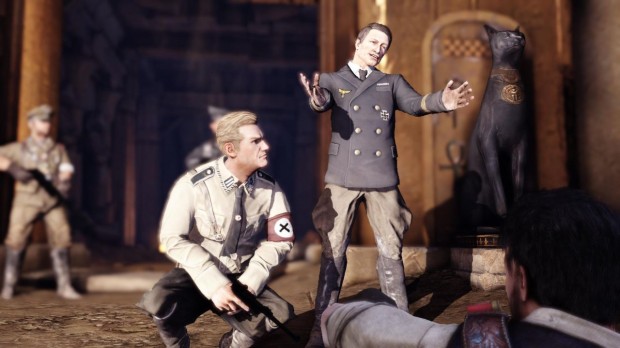 Once in a while, a game comes along that completely blows you off your lid. The credits roll, and your mouth still hangs open in awe. You can’t find anything to say. And suddenly regret falls over you. The game is over. It’s done, and there’s no more DLC on the way.

Deadfall Adventures is not one of those games.

In Deadfall Adventures, you play as an adventurer/treasure hunter, Quartemain. It’s the year nineteen-fourty-something. And completely in ‘Raiders of the Lost Ark’-style, you’re recruited by the Allies to find a treasure that could completely turn the tide of World War II. Which of course means that there’ll be nazi’s, and a whole lot of them too. I’m not going to go further into much detail into the story. It’s cliché and incredibly predictable. Basically, you just hop from one temple to the next, looking for pieces of an artifact, all the while being hunted by the Third Reich. Later on, the Red Army joins in as a second antagonist as well.

When first starting the game, the menu screen opens up with large fanfare, great orchestral music that makes an awesome first impression. I was totally psyched to start playing, and was expecting myself to something that would mirror Uncharted. The first level started out okay. You’re in the Egyptian desert, outside, near some Pyramid, and the outside decor and visuals look great. The visual design is actually one of the better points of the game, especially outside environments always seemed to amaze me in their wide open and detailed terrain.

And then you meet the nazi’s. And when I met the nazi’s, the game made its first bad impression on me. Not the kind of bad impression that nazi’s usually make, but of a more gameplay related issue. First of all, you’re never really sure if they actually are nazi’s. If you ever saw the movie The Great Dictator with Charlie Chaplin, you will remember that the titular dictator, contrary to the real-life Adolf Hitler, doesn’t wear a swastika on his uniform, but two small x’s. Well, the nazi’s (?) in Deadfall Adventure, in a similar fashion wear an X on their armbands. Now, I don’t know if this is some joke from the developers, maybe even a reference to Chaplin’s movie that I instantly got, but I sure hope it is, because else that’s a minus ten points for immersion. I have never seen a World War II shooter (and there are almost as many of those as there are Marvel superhero movies) without swastika’s. If the developers tried not to offend anyone with fascist symbolism, one message: don’t make a game about nazi’s. Make one about teddy bears or an Italian plumber.

There was a second reason the nazi’s made a bad impression. I read in books that the German military actually really kicked some ass back in the day. I experienced this first hand when I first played Medal of Honor: Allied Assault in 2001, with its excellent enemy AI. But these nazi’s are about the dumbest regiment in the entire Wehrmacht. I’ve noticed that enemies either come right at you in kamikaze-waves, or jump behind a corner and stay there, sometimes taking a look around the corner to take a shot. It all seems incredibly scripted. Even for a non-realistic shooter experience that doesn’t profile itself as the next Call of Duty killer; it’s kind of a buzzkiller. There’s no real challenge in combat.

And that’s what my next point is about. Call of Duty. You may know Call of Duty: Ghosts was released recently as well. Deadfall Adventures, gameplaywise, feels and plays exactly like Call of Duty 2. Not Black Ops 2. Not even Modern Warfare 2. Call of Duty 2.Which was released in 2005, and had much better AI. Much better other things as well, to be honest, which I will illustrate further. Deadfall Adventures plays in exactly the same manner as CoD. You can carry only two weapons with you at the same time, one of which will be a pistol, the other a rifle, machinegun or a shotgun. There’s a melee attack, which unfortunately uses the same button as the radial menu. This is annoying. Yes, you can change this in the controls menu. But it’s sloppiness from the developer’s part. There’s no life bar, when you get hit the screen turns red, forcing you to take cover and regenerate health. If you don’t, you die. There is no quicksave button, you cannot save during the game. Instead, the game saves with regular intervals at checkpoints. So you see where I’m trying to go when I say that it’s like CoD, only with more clunky shooting mechanics.

The checkpoint system does much to disrupt the flow of the game. Since a large part of the game is spent in underground tombs, you will encounter boobytraps, and lots of them. So imagine that you have just killed dozens of enemies, withstood waves of mummies, and then you take a few steps down the hall, and before you know it, you fall down a spiked pit. And since the game hasn’t saved yet, you get to do this all over again. I could live with this if it were exceptional, but Deadfall Adventures has a lot of these moments, and to be honest, they really got on my nerves. One more thing about shooting controls: your undead enemies only become vulnerable after you’ve hit them with your flashlight. This seemed kind of useless to me and only slowed down gameplay, since they only need a few hits after that. As a gameplay mechanic, it just doesn’t work and is superfluous.

Graphically, it’s a mixed bag. Deadfall Adventures runs on the Unreal Engine, and as I have said before, the visual style is very well conceived. The game has a cartoonish presentation that very much resembles BioShock Infinite. The outside environments are beautiful. Of course, this is a treasure hunt, so most of the time won’t be spent outside, but in dusty tombs and underground temples. And down there, the game shines a lot less. Blurry, low resolution textures clearly show the game’s outdated graphics, which would have looked fine five years ago, but compared to more recent first-person shooters, it’s an ugly little duckling.

Deadfall Adventures is as much a puzzle game as it is a shooter. Think Legend of Zelda meets (again) Call of Duty. Down in the dusty tombs, a lot of strange contraptions have been built to end the life of possible visitors or at the very least bar their passage. Quartemain, however, is prepared for this, since he carries with him his great-grandfathers notes. His ancestor seems to have preceded him in visiting all these different places, because hints to all the puzzles are included in this notebook. Remember that diary from Indiana Jones and the Last Crusade, it’s just like that. It’s possible to set the puzzle difficulty higher or lower in the beginning of the game, so if brain-crackers aren’t really your thing, and you just want to shoot Germans and Soviets, the game can go easy on you if you so desire. The puzzles themselves range from really simple, ‘don’t step on the snake tiles’, to very ingenious. There was this one puzzle which featured mirrors you had to point at each other to direct a beam of sunlight, I really liked that one. At times the game’s puzzles are very nicely done and they feature as one of the game’s more redeeming qualities.

No tomb raiding game without treasure hunting. Throughout the levels, your character will find treasures, each falling into one of three categories: Power of Light, Power of Life and Power of the Warrior. Each of these ‘powers’ represents a talent tree that you can upgrade. For those of you who played Dishonored, it kind of works like that. You have a compass that points to nearby treasures, treasures that give you points to distribute amongst each of the three talent trees. The problem I had with this feature is that the game doesn’t give you much freedom in letting you choose where to distribute your points, since each kind of treasure can only be used for its corresponding talent tree, which isn’t very diverse to begin with. Also, unlike Dishonored, the upgrades don’t add any unique gameplay features, but are limited to a bit more health, a bit more stamina, slightly faster reload times, you get the picture. I thought this treasure-hunting was kind of a useless addition and more of an excuse to stretch the game’s short length. It really doesn’t add anything substantial, and most of the time you just wish looking for treasures wasn’t included in the game, because it’s really, really boring. Dishonored succeeded in implementing a talent tree feature, but this game fails.

The game has a great variety of multiplayer modes. Unfortunately, there was no one online yet to play against. But basically, it works and looks just like CoD: there are classes, you can earn XP to unlock new weapons and you can create your own class.
Deadfall Adventures gave me mixed feelings. To be honest, it isn’t a really bad game, at times it was even quite fun. But in contrast, it’s not a very good one either. I had to drag myself through its uninspired story in which suspension of disbelief is key, and its unpolished gameplay didn’t give very much cause for excitement either. It tries to implement elements from different games but does this half-hearted each time. This game would’ve made a great Call of Duty total conversion mod years ago. But as a standalone product, Deadfall Adventures doesn’t hold up against the A-titles of 2013.

Deadfall Adventures is a game that doesn’t stand out. It has few redeeming qualities, and if you’re a FPS fanatic, there are much better games out there for you to play.

Tom has been gaming ever since he could walk. As soon as he got his hands on an NES, his childhood revolved around the adventures of Mario and Link. Later on, he switched to Playstation, but eventually became a PC fanboy, and to this day it still remains his platform of choice. Tom studies law at Ghent University, Belgium and next to video games, his hobbies are a variety of martial arts, playing rugby and once in a while he also does a CrossFit workout.
Related Articles:
Share
Tweet
Share
Submit