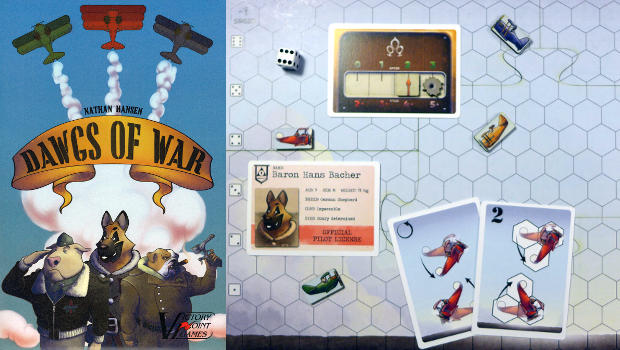 I pulled an Immelmann and blew that Fokker out of the sky.

My poor brother. Lost again to my Sopwith Camel.

The year was 1980 and the game was the innovative Ace of Aces: Handy Rotary Series, currently from Flying Buffalo Inc. It did what no other game managed before the era of networked PC games with high-end video cards: gave gamers a pilot’s eye view of WWI biplane dogfighting. Two portable picture books contained a series of line drawings of two planes relative to each other in the sky. Players chose maneuvers at the page bottoms that matched page numbers, then they called out the number. Both moved to an intermediate page, matched the maneuver and its page number again, and settled on the shared page number listed and its new image that corresponded to both players’ maneuvers. Any bullets streaming toward you or your foe determined who took damage, if any.

Ace of Aces rocked our world with a taste of real aerial combat. The game was so popular and beloved, with editions on eBay going for $$$, some smart person Kickstarted an update in 2012.

This review is not about Ace of Aces, though. It’s about a different dogfighting game–this one with WWI-era biplanes flown by actual dogs.

Dawgs of War from designer Nathan Hansen and Victory Point Games is a light wargame that pits two to eight players (individually or in teams) in a last-canine-flying air battle. It says “Euro Game” on the side of the box sleeve, and you could make a flimsy case for that genre because the game relies on cards to drive movement and actions. Still, hexes mark the sky map and you get tiny plane chits, much like a wargame, plus players get eliminated. That Victory Point is better known for wargames than Eurogames…I think it got shoved into that category so as not to confuse grognards who play REAL wargames. Not that there’s any chance of confusion given the title and cartoonish game cover.

Not a rawhide chew in sight

Victory Point Games is a publisher with a few oddities, as the parenthetical remark above notes. Dawgs of War comes in both boxed and bagged versions, the latter costing a few bucks less. The company is also known for laser cutting its thick cardboard pieces, so it includes a napkin if you need to wipe soot from token and counter edges.

The board situation is a little odd too, as my copy included both a cardboard board that locked together through a puzzle mechanism and a board of folded cardstock. I wasn’t sure if this was a mistake or not, given that the component list includes just one board, but I figure the puzzle-piece board is meant for the boxed version, while the bagged gets the cardstock.

Speaking of card stock, the cards in this game are semi-matte surfaced. While not the best cards I’ve seen, their heft means they may stand up well to repeated plays. The cardboard pieces trade off their above average thickness for an overall size that borders on minuscule. The small size doesn’t allow for much bonding with your doggie pilot, as he/she is barely visible in the plane counter’s cockpit.

Artwork is one step up from a college newspaper cartoon. The word serviceable comes to mind. Because the game features eight different player colors, the opportunity for color confusion is always possible, and yep, a few of the colors are tough to distinguish due to hue and shade choices. Because of the small size of the plane counters, the slight differences in plane models don’t much help overcome the color issues.

As for the rulebook, while the rules are laid out nicely and with good-sized text and plenty of whitespace, I had to reread several of the rules to get their meaning. In addition, special power cards modify game rules, and a few of them contain red text that explains how and when the card is played. Adding rulebook clarifications on a few of those cards, or at least term definitions, would have helped decipher their meaning. I know I stared at the Barrel Roll card a full five minutes before I got what it did and how it was played. Though the game is rated by the publisher as “Complexity: 2 on a 9 scale,” if even a couple cards confuse you, then you might consider that “2” a misprint for a “9.”

Let’s just say this about components: In the larger board game publisher world, Victory Point Games will never be confused for Days of Wonder.

Let slip the…oh, the heck with it

Each player gets a unique pilot (bulldog Angus Howles, German shepherd Baron Hans Bacher… you get the drift), three cards numbered 1, 2, and 3 that adjust the plane’s angle of attack, one clockwise rotation card, one counter-clockwise rotation, one rotation unchanged, and a special power card that adds a unique ability to each player. The 18 special power cards include such boosts as rear-gunning capability, speed bursts, smokescreens, and–chronological anachronisms aside–duct tape.

The player ID card gives some info about the pilot. The back side of the ID shows a condition bar used to chart flight speed, damage, and vulnerability to breakup. A measure of the combination of too much damage along with too much speed, breakup determines if a pilot dies and is out of the game. Crashing into the ground also eliminates players.

Players roll the die to determine on which side of the board they begin, then they roll again to determine starting altitude. Each player selects one numbered card and a rotation or special power card, then plays them secretly. All players reveal cards together, and the air war begins.

If a player changes the angle of attack on a plane to correspond with the hexes on the board, that change is made in the card direction shown. Players enact special powers, if played. Some special powers last through all rounds. Some play once per game.

Players then move their planes along the angle now flown, with speed determined by the speed gauge on the ID/condition card bar. All players start at a speed of 1, but climbing and diving at certain angles will raise or lower it. Speed corresponds to plane length. Move one plane length (two hexes) times the speed indicated. A speed of 0 may be possible if a plane reaches the upper atmosphere or tries to climb too steeply without enough initial speed; it stalls and falls back toward the ground, eventually regaining speed.

Players take a firing round next. This is where it gets a little dicey. The rulebook shows a hit range cone that extends about six hexes from the plane’s prop, but how that cone conforms to the hex map at different angles can be frustrating to calculate and is not always obvious. We tried to use a card length to help envision this, but even then it meant staring at the guide in the rulebook when a plane was at a certain angle of attack. Ugh. A foe within that cone can be fired upon. Players who can take a shot roll the die. If the result matches or beats the foe’s vulnerability rating as depicted under the foe’s current speed, it’s one damage. If it beats the vulnerability rating by two or more, it’s two damage. The hit foe moves a damage token from right to left to track damage on the condition card bar.

For pedigreed pilots only

Dawgs of War comes with optional rules that enhance gameplay for more experienced players, most rules dealing with what players do should their plane move off the map. Another mod: Use the continuous fire token to improve chances of hitting a foe.

“Dad, this game is fiddly”

When my 13-year-old son and I played through Dawgs of War, he made the comment above. We’ve played many games together of all kinds, yet I’ve never heard him use that damning term.

Indeed, though this is a simple game in theory, it has the same niggling maneuverability rules that dog much heavier wargames. I used to play meaty wargames in my younger days, but I got away from them because of fiddly line-of-sight rules, constantly trying to calculate speeds and angles, and so on. Dawgs of War, though simpler, still includes that fiddliness, enough to frustrate my son, who has not played hex-and-counter wargames before.

For that reason, I can’t figure out the target market for Dawgs of War. It’s too light for grognards. It’s too fiddly for casual gamers. It’s not Eurogamerish enough to appeal to Eurogamers. Board gamers would be more attracted to FFG’s Star Wars: X-Wing or WizKids’ Star Trek: Attack Wing, both of which come with excellent spaceship models that better connect with players visually. And if board gamers want to maintain the historicity of WWI aircraft, Ares Games’ Wings of Glory was the inspiration for both X-Wing and Attack Wing. For the board gamer who wants a card-driven Eurogame/wargame that’s more down-to-earth, Memoir ‘44 from Days of Wonder may be the game of choice or even the excellent, dice-driven 1775 Rebellion from Academy Games (see our review: “If they mean to have a War, let it begin here! – 1775: Rebellion”).

Three pros in Dawgs of War’s column: It can play up to eight, can be played in two teams, and it’s inexpensive. Is there such as thing as a party wargame? That would be a strange party. I know I wasn’t able to get enough people together who wanted to play Dawgs of War to get close to eight, but I can imagine it’s a logistical nightmare. Consider that eight players would need to encircle the small board. If you think trying to read a board upside down is hard, try visualizing your plane counter upside down from you while trying to choose orientation cards.

Perhaps Dawgs of War has potential with a family helmed by a heavy wargamer trying to debut a game his kids might grasp. Then again, the lower age limit on this game is 13, while the age on some I mentioned above is as low as 8. (Really, Victory Point, I’m trying my best here…)

All this brings me back to that other dogfighting game, Ace of Aces. That game is elegant in its execution and features a top-notch aerial simulation. Plus, it took the game play into three-dimensional space and put the battle in the mind’s eye of each player. Anyone looking for a decent dogfight game should skip the dawgs altogether and look up Ace of Aces–or some of the other games mentioned.

Dawgs of War is an inexpensive, basic, WWI aerial wargame with a light-hearted “dog pilots” theme and a supposedly Eurogame heart. But it doesn’t do anything well enough to set it apart from other dogfighting games that are either more elegant (Ace of Aces) or more visually appealing (FFG’s Star Wars: X-Wing or Ares Games’ Wings of Glory). It’s fiddly too.