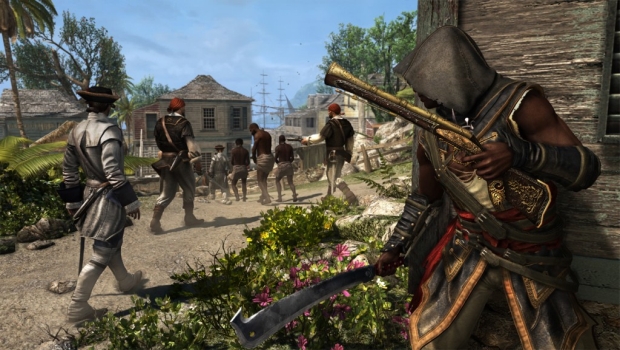 I had very high praise for the current-gen version of Assassin’s Creed IV, but it’s the next-gen versions that everyone wants to see. I’ve recently spent a little time (that’s to say I’m almost done with my Platinum 100% trophy!) on the PlayStation 4, and I’ve also spent a good bit of time with the Xbox One version of the game. This article will serve as a review for the PlayStation 4 version of the game, but will also cover the marginal differences between the two versions.

The first thing that you are likely asking is which version has the higher resolution. Thanks to a recent patch, the answer to that question is PlayStation 4. There have been numerous analysis videos spewed onto the Internet, but all of them have one thing in common – they are compressed and don’t really convey the visual fidelity of either platform. The PlayStation 4 operates at 1080p, whereas the Xbox One turns in its performance at 900p. Having seen both of them run for hours, I can tell you that the visual difference is nearly imperceptible. The Xbox One version looks slightly sharper, leading to a few harder edges than the softer blend of the PlayStation 4. The softer edges are my preference, so I’d give the edge to the PlayStation 4, but I’ll again reinforce that the visual differences are so minute as to be a non-issue.

There is a small change for the PlayStation 4 that the Xbox One cannot match as Microsoft’s controller doesn’t have a touch screen. Opening the map on the PlayStation 4 is performed by pressing in the touchpad/button. You can then use this touchscreen by sliding your finger to navigate the map, though I found myself simply using the thumbsticks as I didn’t want to use a touchscreen even smaller than that of a laptop to navigate such a massive map.

There are two items that I won’t hold against Ubisoft as that would be entirely unfair – the install times and patching sequence. On the Xbox One, patches must be downloaded prior to install. Given that literally every game that shipped for the launch of both platforms required a substantial patch (one north of 3 GB in size!), this means waiting for a rather large patch before you could even start installing. On the PlayStation 4, installs can be completed while the patches download in the background to be applied later. Brace yourself though – the Xbox One takes roughly seven to eight minutes to finish the patch (depending on download speed) and then install, whereas you can be sailing the high seas on the PlayStation 4 in a scant 42 seconds. Again, none of that is Ubisoft’s fault, but it’s only fair to set that expectation before you crack the plastic on that case.

There were a lot of bugs in Assassin’s Creed III. It took several patches to get it right, and that hurt the brand reputation a bit. I’m pleased to say that I only really encountered three bugs and two of them were cosmetic. As you sail you’ll encounter shipwrecked sailors waiting to be rescued. As of this writing nearly every one of them will wave at me and then disappear to the bottom of the ocean. I can still rescue them, I just can’t see them and the indicator shows that they are indeed visiting Davey Jones’ Locker. The second bug was absolutely hilarious. As I was visiting one of the major cities in the game I heard what I thought was a Red-Legged Seriema (enjoy the video on that one folks – we recorded it at the LA Zoo), but was actually a woman who had gotten stuck falling off of a high platform. As she kept bouncing off the nearby net she was in a continuous screaming loop. My wife and I spent entirely too long laughing at this unfortunate screeching woman.

The final bug was actually in the final battle. After the inevitable monologue I positioned myself for an air-assassination and leapt to my target. Inexplicably, nothing happened. The foe didn’t shrug off my attack like an alerted enemy, he just was unharmed. A quick restart of that checkpoint remedied that issue. Just three bugs encountered in a game with more than 40 hours of gameplay is a vast improvement over its predecessor, and doubly impressive given the expanded platform list.

The largest difference between the current-gen and next-gen versions of the game is obviously the texture differences and polygon count, but it’s not those things that’ll catch your eye. The launch of the PlayStation 4 and Xbox One is about small details with titles that appear on both generations of consoles. For instance, on the current-gen version of Assassin’s Creed IV Black Flag you’ll see that the stalk zones (areas where you can hide and take out targets) don’t sway as you move through them, but on the next-gen versions they shift and bend out of your way. Large leaves snap back as you pass them, though they don’t alert guards – I’d be surprised if things stay that way for the next title.

The Xbox One Connection

As we already stated, the Xbox One version does run at 900p natively, but thankfully the visual differences are minimal at best. The framerate is rock solid, and it is beautiful to look at. It’s hard to judge as the weather seems to be dynamic, but there seems to be a few less clouds in this version, but without putting them side-by-side you’d be hard pressed to notice. If you were concerned about the resolution or some of the overly-compressed side-by-side comparison videos you’ve seen, don’t be. The install times aside (and you only do that once), there really is very little difference between them. You are going to enjoy this game, regardless of the version you buy.

Weather in both versions of the game is absolutely amazing, but on the PlayStation 4 and Xbox One it’s something on another level. Similarly, there is a vastly expanded volumetric fog and smoke mechanic, horizon-based ambient occlusion (it provides realistic and dynamic shadows), percentage-closer soft shadows, and a completely rebuilt lighting engine. All of those culminate in far more realistic scenes and environments, but it’s the volumetric fog that changes gameplay. On the current gen version of the game you can typically see through the fog and still rain hell on your foes. Launching a volley on the next-gen versions spews vast amounts of gunpowder smoke into the air, completely obscuring your vision. This has an impact on gameplay as you engage multiple ships. They can maneuver out of range, reposition, and move to flanking positions under the cover of smoke. Not all of the next-gen improvements are just shiny bells and whistles, but it’s these sorts of changes that have me most excited for this new generation. To further demonstrate the vast improvements in the engine, check out the video below and read up on NVidia’s page:

This next-generation launch has been described as a little anemic, but I’d have to disagree. There are some incredible games hitting the market this holiday season, and this is one of them. The PlayStation 4 version of the game is mechanically the same as the PlayStation 3 version, but the new engine is eye-poppingly awesome. The new visual tech has gameplay implications, which is rare and highly appreciated. In the end you really can’t go wrong with either version, but the PlayStation 4 version has entirely too many bells and whistles to not recommend. The fact that I’ve had a bout of OCD and needed to find each and every thing in the game speaks volumes.