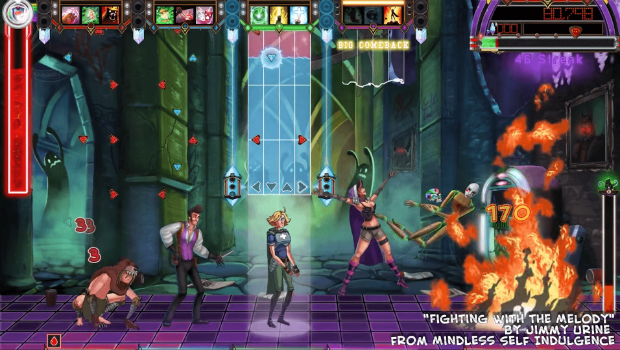 The Metronomicon is not here to make new proclamations about the status of music.  It’s fairly well known that music is a deadly weapon. Whether you’re getting “down with the sickness” of the “rockin’ pneumonia and the boogie woogie flu” or you’re shredding a face melting hook on your axe, violence is present and paramount.

Combine that with the fact that most musicians and the rhythmically obsessed (i.e. this guy right here) are borderline psychotic, it stands to reason that if you replace their drum machines with killing machines, there will be some funky, funky blood. The Metronomicon further proves that music is indeed a force of destruction, and along the way shows itself as one of the most exciting and creative rhythm games in the history of the genre.

The Metronomicon is very fast paced, combining a turn-based RPG battle with a song and a beat, using the mechanics of rhythm games to use attacks, spells, buffs and debuffs. The game is much more of a rhythm title than an RPG outright, but you do level up, collect items, and face off against minor, major, and boss level enemies.

Where the game does lack in many RPG elements, such as exploration of a world, the rhythm mechanic of the game makes up for it with an incredibly balanced battle party, with each character being equally important to the task at hand. Surprising, considering the light hearted nature of the game itself, but a very welcome part of the game to be sure.

In each stage, you select a song from a list of well known independent acts such as Shiny Toy Guns and DJ Cutman, and a set of deep tracks from across the spectrum of dance music to go along with them. The songs are all very fun and often times high quality. Each song has its own difficulty grade, and you can choose to play the song on an easy, medium, or hard setting.

The resulting concoction is a beautiful mix of strategy battling and dance grooves. The initial four characters, being a brute warrior, a paladin, a healer, and a mage, each take a part of the song, meaning each level is divided akin to a Rock Band track, as opposed to a Dance Dance Revolution track that mixes them all together. When you complete a sequence, it triggers an attack or spell, and then gives you a grace period where you can switch between the characters and do it again.

Say you’re the warrior, and you complete a short section to strike an attack. You switch to the mage, and then complete another section to cast a spell. Next, you switch to your healer, and after a completed section everyone’s feeling a little better. You repeat this process until either you’re dead and the game is over, or the song ends and you’ve endured the gauntlet therein.

The characters are placed on a line, and you have the ability to choose their placement.  This, along with knowing which sections of a song are the easiest for each character presents a lot of chances for strategy.  Rather than just an endurance test to see how long you can keep from missing steps, Metronomicon plays more like a series of overdrive challenges from Final Fantasy X.

No matter how the game plays, or which ever button pressing memory it draws up in you, there is no denying that the Metronomicon is a purely unique experience. Slightly similar to other games out there, but truly on an island in terms of gameplay and design. It’s a luxury island, with a booming nightclub that never stops, and a litany of deadly dancing bears, wobbling wisps, and gyrating ghouls to murder with your funky style and magic feet.

In addition to the standard song challenges, there are intermittent “side quests” that are special challenges, such as “get a 100 streak” or “deal 10000 damage”. These can be completed for additional challenges to be unlocked, as well as new songs and items.

Comparatively, some of the other aspects aren’t up to par with the gameplay. The game has a strange cartoony design that reminds me of paper dolls come to life, but lacks the design elements that would make that intentional. As it stands, the game has a bad uncanny valley problem. The menus are easy to scroll through, but navigating back and forth between sections can be a chore. I really just don’t like it when a game won’t let you use the mouse for selections, as opposed to the keyboard, but it isn’t a big problem if you’re used to a keyboard control scheme.

Overall, these drawbacks are incredibly minor. While certainly not the prettiest these design elements can be overlooked due to the high quality of the game itself. The game does have a nice control scheme, and can be played using a controller, keyboard, guitar, or dance pad peripheral.

The game allows for the collection and use of items, which boost a character’s stats. The characters also level as your play through the story, giving you stat increases. Each of these allow you to shape your team to your liking, and improved stats for the characters makes each song a bit easier for you as you go along.

Bright, bold, and loud is the Metronomicon, and though it has a namesake broiled in evil, the game is pure, unfiltered goodness. A dance step game that is also a RPG battler, the game keeps you active, keeps you thinking, and loosens some of the stagnation for both genres by throwing them into a blender together. A grand concoction, The Metronomicon is a must have for any gamer.

Patrick Rost has been with Gaming Trend since 2013. At first focused on sports coverage, Patrick has gone on to cover a wide range of games and other products for the website. Outside of Gaming Trend, Patrick writes and records music, grinds perpetually in Elder Scrolls Online (PS4), and lives day to day with his two dogs, Bob and Stella.
Related Articles: The Metronomicon
Share
Tweet
Share
Submit