As promised, the team at Popcap have brought us the first expansion for their unique and fun little shooter (built on the very serious Frostbite 3 engine), Plants vs. Zombies Garden Warfare.  This pack brings the game to the Wild West in a pack entitled “Zomboss Down”.  The price?  FREE.  It’s not just maps though, let’s dig our hands into the soil and see what other gems we get:

Starting today, the hilarious shooter Plants vs. Zombies™ Garden Warfare heads to the Wild West in Zomboss Down, the brand-new free* downloadable game pack. The new pack will feature even weirder shooter fun with the new Cactus Canyon Gardens and Graveyards Map, eight new playable characters, over 200 wild customization items, an increased Level cap from 20 to 30 for each character, and all-new challenges to accomplish on Xbox One, the all-in-one games and entertainment system from Microsoft, and Xbox 360® videogame and entertainment system.

In Zomboss Down the plants have blasted down Dr. Zomboss’s blimp and unleashed packs of zombies, who are now roaming the desert and battling their way through the wreckage to reach the local golf course. This golf course doubles as a super-secret facility housing a Cactus army on the unbelievable new Gardens and Graveyards Map, Cactus Canyon. Players will also enjoy increased character levels and eight fun new characters like the Archeologist Zombie, the Wrestling Star Zombie, the Law Pea and the Sun Pharaoh. In addition, players will discover weapon upgrades and skins for new characters, new accessories, tattoos and facial hair, and even more.

We’ve got a few screenshots to show off as well as the video above.  If you’ve not read our review of the game, check that out and then go pick it up for yourself. 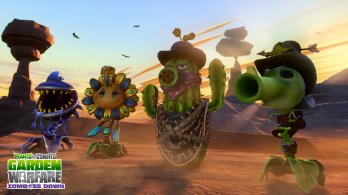 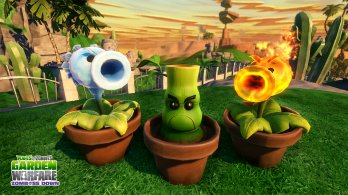 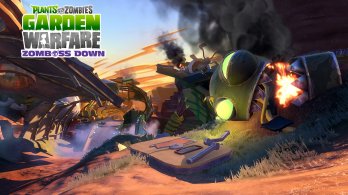 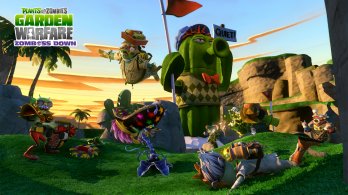