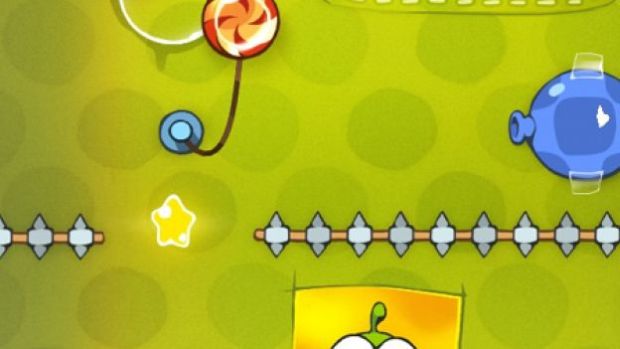 Zeptolab’s hugely successful Cut the Rope franchise will now be making its debut on handhelds as today Activision unveiled their plans to release the first three installments in the franchise on the Nintendo 3DS. This title will be called “Cut the Rope: Triple Threat” and feature the original mobile version, as well as “Cut the Rope: Experiments” and “Cut the Rope: Time Travel.” Of course, since this is launching on the 3DS, you can expect to see all this rope glory in magical 3D.

Cut the Rope is a single-player, touch-controlled, physics-based puzzle game starring Om Nom®, an adorable green monster with an insatiable appetite for candy. In each scenario, it’s up to you to feed Om Nom the sweet snack he desires by successfully manipulating a series of obstacles with simple taps and swipes, while collecting bonus stars along the way for high scores. Later themes introduce additional mechanics, like steam valves, bubbles, magic objects and teleporting portals, mixing them seamlessly with earlier elements for ever-increasing combinations of trials. The result is a charming blend of creative, out-of-the-box design, and thoughtful strategy, easily accessible for young gamers while still providing a challenge to adults and perfect for playing in either quick, casual bursts or longer, more relaxed sessions.

Cut the Rope: Triple Threat will consist of over 650 levels, which according to Activision, results in “more than 50 hours of gameplay.” No specific release date was given, only that it will arrive in “early 2014.”