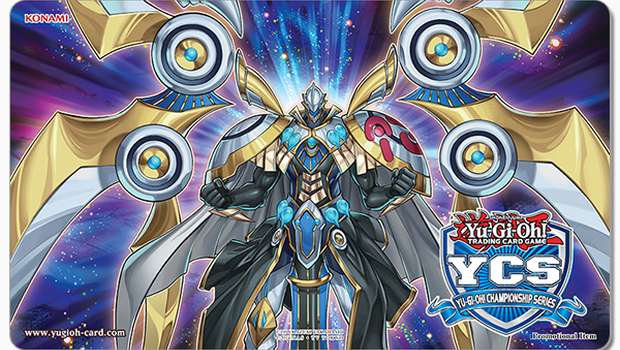 While the Yu-Gi-Oh! tv series hasn’t had much of a presence in the US since it left network TV when The CW stopped airing it, the game itself is still going strong.  Organized play is a big part of that, and this weekend the city of Minneapolis is holding a tournament for all ages.

It’s Time to Duel in Minneapolis! Konami Digital Entertainment, Inc. (KONAMI) brings its premier level Yu-Gi- Oh! CHAMPIONSHIP SERIES (YCS) to Minneapolis, Minn. October 15 – 16. This is the first YCS of the new Dueling season to be held in the United States. This weekend-long tournament gives hundreds of Yu-Gi- Oh! TRADING CARD GAME (TCG) Duelists from across the United States and Canada a chance to show off their Deck-building skills and strategies and to compete with their peers.

There promises to be intense back-and- forth of competitive Dueling during the two-day YCS event – and new exclusive YCS prize cards will be awarded to the weekend’s top finishers. Those top finishers will receive the new Number 93: Utopia Kaiser prize card. Different from the regular cards found in booster packs and other Yu-Gi- Oh! TCG products, Number 93: Utopia Kaiser can only be obtained by finishing in the Top Three spots at a Main Event of a YCS, or by winning a special Public Events playoff tournament. This makes Number 93: Utopia Kaiser highly coveted by the large community of Duelists around the world that will participate in the high-level competitive YCS events during the course of the season.

Pre-registration for YCS Minneapolis will run from 3 p.m. – 7 p.m. on Friday, October 14 and registration will continue promptly at 8 a.m. on Saturday, October 15. Round One will start at 10 a.m. Upon registering, Duelists will receive five of the recently released The Dark Illusion booster packs for participating in KONAMI’s YCS Minneapolis. Players will use their constructed Decks all the way to the final match. The top-ranked YCS finishers will earn invitations to participate in their 2017 World Championship Qualifier. Duelists can find the answers to many of their questions here: YCS Minneapolis FAQ

You can find out more information at the FAQ above or their home site.  It looks like they have some great prizes, and it looks like they have different tournaments for younger players.  While the game might be simpler than Magic: The Gathering, it’s a great way to introduce younger gamers to trading card games.