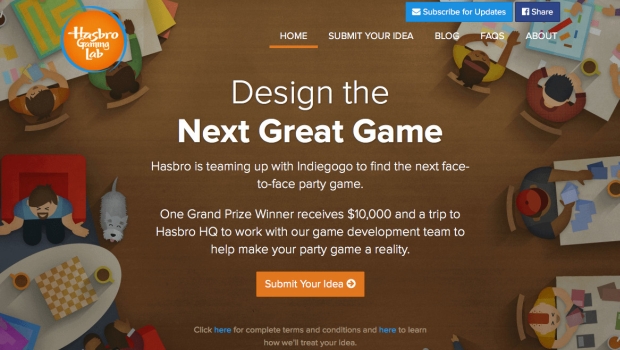 It isn’t surprising that people are using crowdfunding pages to self-publish games.  Getting noticed by a publisher is tough, and with the popularity of board gaming increasing, it seems like more people are trying to get into the act.  However, Hasbro is giving you the chance to get noticed, and they are partnering with Indiegogo to do it.

Hasbro, Inc. (NASDAQ: HAS) today announced that it has teamed up with crowdfunding website Indiegogo to find the next hit face-to-face party game. As Hasbro continues to focus on connecting with the gaming community to discover and develop new games, the challenge will help identify one big idea that Hasbro can help cultivate and bring to market.

Starting today, Hasbro will call on game designers nationwide to share their ideas for a new party game on www.nextgreatgamechallenge.com. Five game designers or teams of designers will be chosen as finalists and will be invited to launch campaigns for their concepts on Indiegogo and will be promoted on Hasbro’s partner page. The grand prize winner selected by Hasbro will receive $10,000 and a trip to Hasbro headquarters to meet with and work with the game development team to help make his or her party game a reality.

“More people are gaming than ever before and the category has grown tremendously with the emergence of a passionate and talented community of game designers,” said Brian Chapman, head of design and development at Hasbro. “We believe big game ideas can come from anywhere and the challenge with Indiegogo will be a new way for Hasbro to connect with the gaming community and discover a big new idea that we can hopefully help cultivate and bring to market.”

“We’re very excited to see the growing trend of large companies leveraging Indiegogo’s global community of early adopters to source, validate and launch innovative customer-driven products faster and with less risk than ever before,” said Jerry Needel, senior vice president of sales and market development at Indiegogo. “By teaming up with Hasbro, we’re helping talented game developers get the global exposure and access they need to help turn their ideas into reality.”

The challenge begins today on www.nextgreatgamechallenge.com where designers can submit ideas through September 30, 2015. The five finalists will be announced on October 30, 2015 and will officially launch their campaigns on Indiegogo to obtain funding and build fan support. Hasbro and Indiegogo will work with the finalists to build their campaigns and offer support. The campaigns will run until December 1, 2015 and the grand prize winner chosen by Hasbro will be announced later in December. Ideas will be evaluated by a team of Hasbro game experts and designers who will be specifically looking at each concept’s gameplay mechanics, theme, potential for ‘fun-ness’ and viability.

The gaming challenge with Indiegogo is the first time Hasbro has worked with a crowdfunding company. It is also one of the first projects led by the Hasbro Gaming Lab, a team at Hasbro dedicated to connecting with the growing gaming community to discover and develop great new games.

So if you think you can make a fun party game that will turn the heads at Hasbro, then be sure to check out the Hasbro Gaming Challenge.  Creating a party game might seem simple, but you’ll have to prove it to one of the largest publishers in the gaming world.