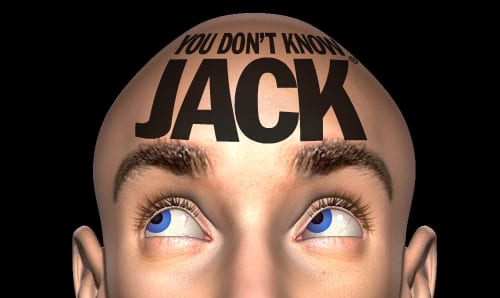 Previously available on iOS, You Don’t Know Jack has been re-released on the App Store to reflect some of the changes and improvements made from the Facebook version of the game. Named Spike TV’ VGAs “Social Game of the Year,” You Don’t Know Jack pits players against each other to answer off-the-wall trivia questions for “cash” and “prizes” (actual cash and prizes not awarded). In addition to being able to take the Facebook experience on the go, there’s an additional bonus to the iOS version:

YOU DON’T KNOW JACK for iPhone and iPad gives you the same social gameplay of the Facebook game – on the go! All the same core gameplay elements are there and you can access the exact same content right on your phone or tablet.

Plus, you can even alternate between your mobile device and computer and we’ll keep track of your episodes played, your tokens, your achievements and your booty.

And just like the Facebook version, YOU DON’T KNOW JACK on iPhone and iPad is free to play, with your first game free every single day.

While there are the inevitable Facebook game “paywalls” — in which players are limited in how much time they can spend playing per day unless they pay actual money to continue — it’s actually a really fun game, and incredibly faithful to the You Don’t Know Jack ethos. Go check it out. It’s free!