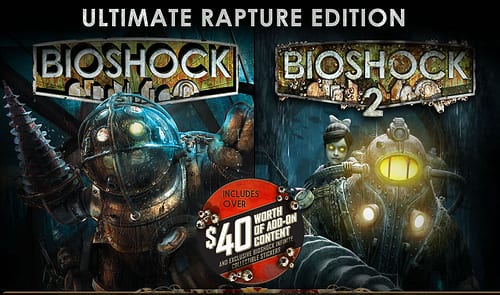 Normally ultimate versions and Game of the Year editions of game fall a little short for me, simply packing up all the DLC and calling it good enough for a re-release.  It’s good to know that Irrational Games and 2K Games will be having none of that – behold BioShock: Ultimate Rapture Edition.  In preparation for the upcoming release of BioShock Infinite on March 26th, we are getting a vastly-improved version of not only BioShock, but also BioShock 2 on January 14th – and it’ll set you back only $29.99.  Behold the sweat of their brow:

The BioShock: Ultimate Rapture Edition includes the critically-acclaimed BioShock, BioShock 2 and add-on content for both games valued at more than $40. It also includes a trip to the never-before-seen Museum of Orphaned Concepts, providing a rare look at early concept art and character models that never made it into BioShock.

Check the press release below for all of the details, but suffice it to say the 8 DLC content items, the sticker pack, and the unreleased character models and art, this sounds like it’ll be worth the double-dip for those who own it, and is absolutely irresistible for those who have missed out on one of the top titles of this console generation.