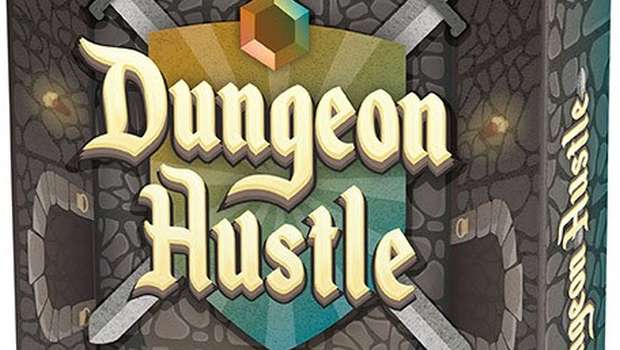 Most dungeon crawls have highly detailed figures and map tiles that snap together.  Lugging the monstrous boxes can break your back if you have too many of them.  WizKids hopes to have an answer for those who enjoy dungeon crawlers but don’t want to break their back with the upcoming Dungeon Hustle.

In Dungeon Hustle, 2-4 players are sent on a quest to rid the dungeon of monsters and keep them from escaping into the outside world! Players will take on the roles of classic fantasy characters, including a Fighter, a Rogue, a Cleric and a Mage. Move through the dungeon to pick up cards and equip yourself with Potions, Scrolls, Swords, Keys and Shields. Each item comes in different colors. To pick them up, you will need to hustle through a path of dungeon tiles of a matching color. When you step on a different color, the hustle ends and you get to pick up the tiles you had stepped on.

Use the items you collect to fight off monsters, complete quests, and earn gold. The gold you have gained can be used to increase your character level for more special abilities!

At the end of the game, players earn points for their character level, gold earned, items collected and quests completed. The player with the most points wins, but don’t forget to hustle; if too many monsters escape, the game ends and all players lose!

The price is right, and it will be available late this month.  Your back might thank you.