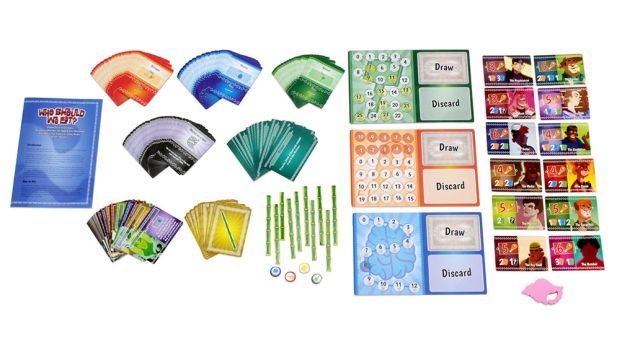 Lifeboat has been a game that’s been played for many years.  In the game everyone takes a role and players go through rounds trying to determine who gets thrown overboard and who gets to stay.  The thing that stunk about the game was that once a player was thrown off the lifeboat, all you could do was twiddle your thumbs until the game ended.  Now WizKids has released a similar game, but everyone stays involved in Who Should We Eat?

Wizkids is excited to announce their newest survival game, Who Should We Eat?, is now available in North American game stores. A lighthearted game designed by Mike Harrison-Wood and Chris MacLennan, you are one of 4 – 10 survivors of a plane crash who resort to cannibalism way too fast! Stranded on a desert Island, you and the others must gather food, find material for a raft to escape, and hold onto your sanity all while fighting ghosts and hunger.

Players play cards to gather resources for the group – adding food, sanity, and wood for the raft. Unfortunately, food is scarce and people are edible. Trials will be held to choose the survivor to sacrifice his or her life – or sometimes a knife fight will determine the person being eaten. For the survivors, this means a loss of sanity, but it also means their raft need not be as large!

However, those that are eaten are not gone forever. They return as a ghost, looking to exact revenge upon the remaining survivors. If the sanity meter fills up too much, then the ghost wins and the survivors are doomed to spend eternity on the island.

Do you have what it takes to get back to civilization? Or will you be voted “most edible” among the group? The stakes are high as the food gets low, so use all your survival skills to build a raft to freedom and hope the ghosts don’t drive you insane.

Pick up Who Should We Eat? today at your FLGS for $24.99, and see if you can survive the island!

I’m glad to see a game like this where the players voted off still get to play along and influence the game.  If you’re looking for a fast playing game for high player counts with a low price tag, be sure to check out Who Should We Eat?