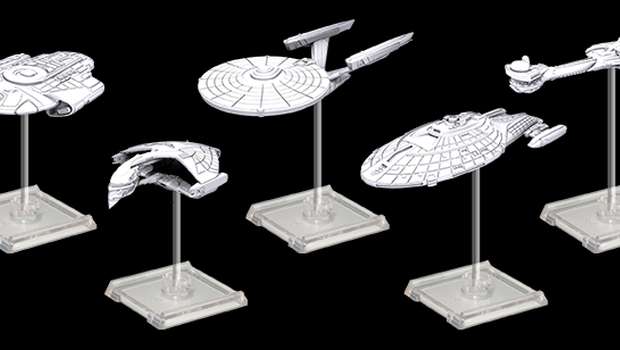 WizKids currently has the Star Trek license, and they have several games associated with it.  They recently introduced several unpainted miniatures for D&D and Pathfinder, and they’ll be introducing them for Star Trek: Attack Wing as well as several new faction packs.  They’ll also be releasing an expansion for Star Trek: Frontiers, Tactics, and Heroclix:

Fans can also prepare to relive iconic battles from the Star Trek Universe or create their own with the upcoming release, Star Trek Tactics, a tactical combat game system returning to hobby stores early this fall. The Star Trek Tactics: Series IV set features over 25 premium pre-painted ships that have never been seen in Star Trek Tactics before! Play with fan-favorite classic factions such as the Federation, Klingon, Romulan, Dominion, and Borg as well as the all new Xindi and Andorian factions! Unlike previous Star Trek Tactics sets, all ship sculpts are used only once within the set! That’s right, Series IV brings 28 unique dials and sculpts to the Milky Way!

There’s a lot there, and WizKids aims to please.  I like the fact that they are doing what they can to reduce costs and keep fans happy.  The Faction Packs for Attack Wing are long overdue, and should make it easy for fans to put together their favorite ships from the series.  Be sure to look for all of these later this year.