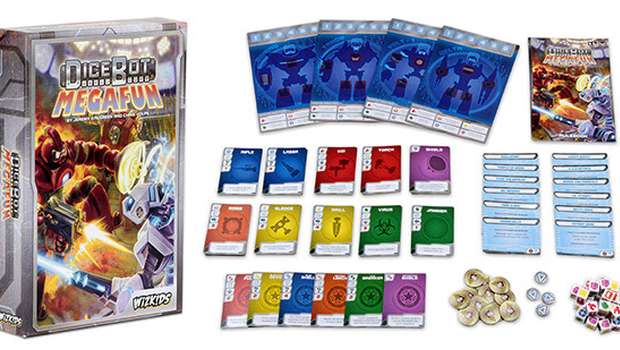 While WizKids is known for their Attack Wing games and miniatures, they also have a strong line of dice games like Quarriors and Dice Masters.  They recently went for a more casual market with Dice Stars, but they’ll be bringing dice to a favorite theme of gamers, DiceBot MegaFun.

WizKids is excited to announce the upcoming card and dice game, DiceBot MegaFun, designed by Jeremy Kalgreen and Chris Volpe.

In DiceBot MegaFun, robots fight for the glory of their human owners. Equip your bot with the parts to power lasers, bombs, drills, and more, as you do battle in rounds of simultaneous free-for-all-combat.

The speed of both the player AND the weapon is key. Each round begins with a mad scramble to scavenge the best parts from the junkyard to power up your secret weapons. Then you choose a weapon to play and hope its speed will be fast enough to tag your opponent. Outthink your opponents and have the right parts for the right weapons, or you will find yourself knocked out of the battle.

Designed for 2-4 players, this dice-grabbing, weapon-slinging, game of battling robots ends when one player’s robot is the first to receive 3 Victory Medals.

DiceBot MegaFun is available in June and you can pre-order your copy today for $24.99 at your friendly local game store!

It sounds like there might be a mad scramble to get parts, but this should be a fun time.  Maybe this will be like a dice-based version of Real Steel.  The price is right though, so be on the lookout for it in June.