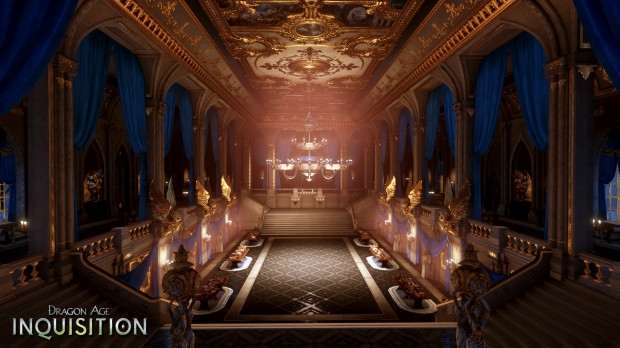 We marvel at The Winter Palace in Dragon Age: Inquisition

The team at Bioware has once again updated their official blog for Dragon Age: Inquisition, and this time it’s with a first look at Halamshiral and the Orleasian structure known as The Winter Palace.  We have four screenshots to feast your eyes upon, but before we check those out, here’s a nibble about this location:

Orlesian nobility has a reputation for enjoying the finer things, and the Winter Palace’s lavish architecture is no exception. What sets the look of this Orlesian gem apart from that of other areas players will visit in the game?

“There’s a plethora of unique areas, but the main point of interest would be the ballroom,” says Corfe. “Oh, and don’t forget to check out the artwork in its ceiling.”

“Ornate decorations, lots of gold, and over-the-top flair,” Love added. “You may also notice the stark contrast between the gold-covered main areas of the palace and the servants’ areas. This also speaks to the large wealth inequality within Orlais. In order to have this kind of excessive decoration, someone has to polish the brass.”

The Winter Palace is quite the sight to behold, but of course, looks can be deceiving. Not all battles here are fought with staves and steel. In Halamshiral, politics can be even deadlier than the blade. The most effective weapons are typically rumor and scandal.

“Combat is not the main focus here,” Corfe says. “Intrigue and social interactions rule the day, so the gameplay has unique elements. We still have some balancing to do, but I’d say it’s shaping up nicely.”

The team had a few more gems to add, but I’ll let you gather that from the official blog.   Every time I look at the game, and every time I watch these extended videos, it reminds me of what a fantastic time we live in for RPGs.

Dragon Age: Inquisition is set to release this October for Xbox 360, PlayStation 3, Xbox One, PlayStation 4, and PC.