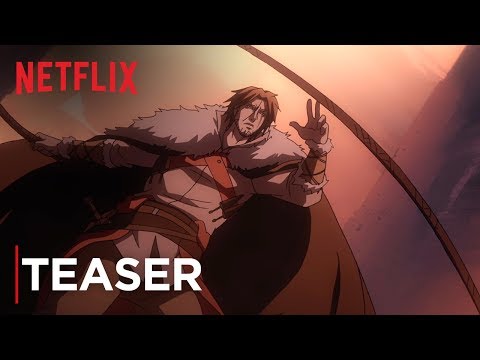 Netflix has revealed its first glimpse of its animated Castlevania series, and it’s looking a lot like Castlevania. With whips and skeletons galore, backed by a Toccata-esque organ and rock score, the trailer hits all of the vampire-hunting tones of the original game series.

Netflix’s initial announcement of the series tells us that it will focus on the Belmont clan of the original game series, as it follows “the last surviving member of the disgraced Belmont clan, trying to save Eastern Europe from extinction at the hand of Vlad Dracula Tepe himself.” Indeed, the new teaser trailer ends with the assumed protagonist identifying himself as “the man who will kill Dracula.”

Before showing off any footage of the show itself, the trailer opens with a shot of a NES in front of an old CRTTV. As an unidentified man boots up the old cartridge reader,  several 8-bit images alluding to other Netflix series appear on the screen, like House of Cards and Stranger Things.

The first season of the Castlevania series is due to launch on Netflix on July 7 of this year.