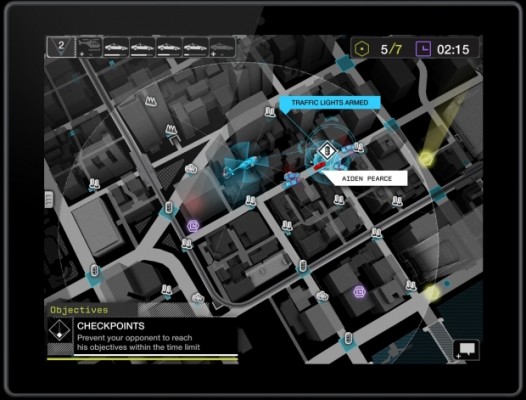 There is absolutely no debate that Ubisoft is fully embracing the second screen experience, as evidenced by their work on Assassin’s Creed IV.  Well, Philippe Baude, Lead Game Designer for ctOS – Mobile, is looking to take the second screen experience to the next level for the upcoming hacking title, Watch Dogs.  Pushing beyond simply moving the HUD to another device, ctOS – Mobile is a full game in and of itself, allowing players to race on their main screen using their hacking skills while another player attempts to thwart them on a tablet or even a phone.  Also included is an editor to create your own obstacles within the game world.   Phillippe was kind enough to take us through a full race and a brief overview of the included editor.   Also embedded in our interview is some brand new footage of the game in motion.

The best part is that the ctOS – Mobile application is not only platform agnostic (you can play against anyone on any platform, all on the same list!), it’s also completely free and does not require even purchasing Watch Dogs!  Check out the preview of the app as played on a Nexus 10.

Watch Dogs is releasing on May 27th on Xbox One, PlayStation 4, Xbox 360, PlayStation 3, and PC, with the Wii U following in the fall.   ctOS Mobile will release on iOS and Android platforms day and date with the console and PC release of the game.