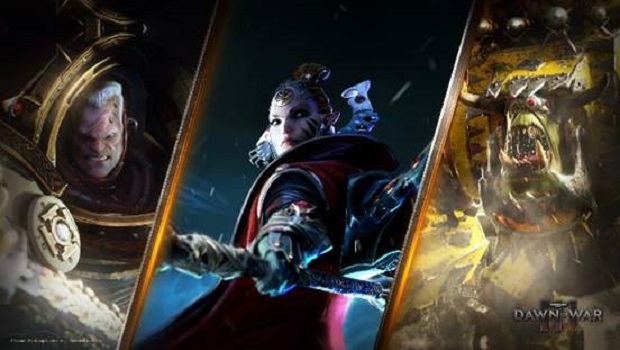 Relic Entertainment and Sega Europe Ltd. released Prophecy of War today, the latest trailer for the upcoming Warhammer 40,000: Dawn of War III. The trailer teases a taste of what’s to come for the upcoming RTS.

Ork warboss Gorgutz ‘Ead ‘Unter also had some important insight on the matter of what fans can expect from Dawn of War III:

it’s a race to the pointy stikk and you know what that means, don’t ya? It’s WAAAAGH!

The trailer shows faction leaders Gabriel Angelos, Farseer Macha, and Gorgutz at odds with friend and foe alike, as the mysterious Spear of Khaine draws them further into deadly conflict. Meanwhile, Lord Kyre of the Eldar rises to prominence within the struggle for galactic dominance.

Warhammer 40,000: Dawn of War III will be released later this year for PC. While you’re anxiously awaiting the launch (like us), you should also check out the three Prophecy of War faction introduction trailers: the Space Marines, the Eldar, and ‘da Orkz.