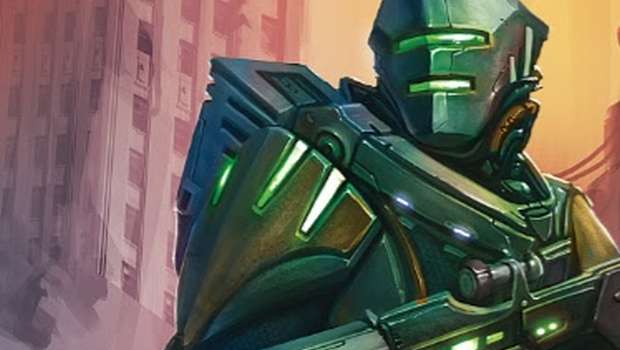 If you’ve played games from Ninja Division like Ninja All-Stars and Super Dungeon Explore, then you know that they make fantastic minis.  However, they have made minis for other games as well.  One of those projects will be coming to Kickstarter soon, Warforged: First Contact.

Reforged Studios is proud to announce the launch of the Kickstarter campaign for their new tactical miniatures board game, Warforged: First Contact™.

“It is very rare for all the stars to align this way and have such a stellar team on all areas of the project,” said Tuomas Pirinen, CCO of Reforged Studios. Warforged: First Contact™ ​and its Kickstarter campaign, is designed to appeal to both miniature collectors and tactical board game players worldwide. The stretch goals and special offers featured in the Kickstarter campaign will introduce a multitude of supplementary game content, including a third faction of human rebels, called The Uprising.

THE UNIVERSE OF WARFORGED: FIRST CONTACT™
Warforged: First Contact™​ pits the fearless warriors of the Iron Legion against the mythical Mantra, a galaxy-spanning covenant of aliens bent on dominating the human race.

In the distant future the Terran Authority has exercised virtually unchallenged control over the colonies of mankind for centuries. Advanced nano-based technology has transformed the human race, extending life spans, curing hunger and disease. A large proportion of the Authority’s populace is enhanced by the ‘Brand’, particle-sized machines moving within their own bloodstream cleaning and repairing, speeding reactions and cognitive functions.

A handful of individuals among the trillions that have merged with the Brand have done so far beyond normal human parameters. They can wield unprecedented power like unto the gods of old; hurl lightning, disappear into thin air or move with preternatural speed. These gifted individuals are known as the Awoken.

The Authority is watched by the Iron Legion, a hand-picked military organization that spans the stars. It exists to protect the people, keep the peace and enforce the Authority’s laws by suppressing the senseless criminality that flares up among the colonies from time to time. Most of the Awoken serve with the Iron Legion as revered commanders, and those few who don’t are closely monitored to ensure their gifts are not misused. All in all life under the Authority is good.

GAMEPLAY
In Warforged: First Contact™​ gameplay is king. The aim of the design team was to create an alchemical mixture of board and miniature game you can learn to play in minutes, while maintaining strong strategic elements and replayability. The game’s core features include:

It looks like there’s a lot of customization available in Warforged, and it’s great to see a unique setting come out.  Be sure to check out the Kickstarter page for more details.