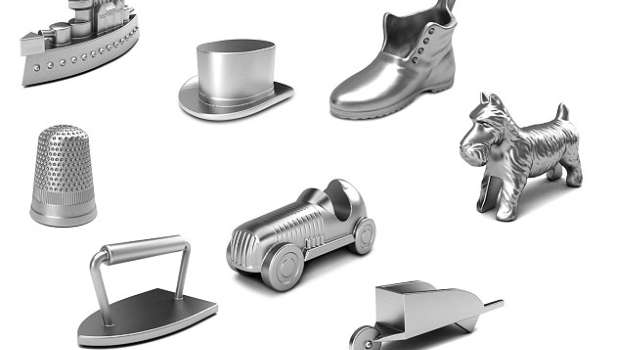 Not long ago the iconic pieces of a Monopoly game were always the same, but not long ago a vote was made and a cat was put into the game.  Now all of the pieces are on the chopping block, as Hasbro has accounted the Monopoly Token Madness Vote.

Will MONOPOLY fans vote to keep the Scottie dog token in the game?  Hasbro, Inc. (NASDAQ: HAS) today announced the MONOPOLY Token Madness Vote, which leaves the fate of the eight current MONOPOLY tokens, including the Scottie dog, top hat, race car, and cat in the hands of the fans.  Starting today through January 31, fans worldwide can visit www.VoteMonopoly.com to choose eight tokens that they’d like to see in the next generation of the MONOPOLY game.  Fans can pick eight tokens from a list of more than 50 contenders including the current tokens and new options such as a penguin, rubber ducky and bunny slipper.  Hasbro will reveal the results of the vote on World MONOPOLY Day, March 19.

“The MONOPOLY Token Madness Vote lets our passionate fans choose all eight tokens in the MONOPOLY game and no token – not even the Scottie dog — is safe!” said Jonathan Berkowitz, senior vice president of marketing for Hasbro Gaming. “Only time will tell if fans will decide to stay with the classics, keep a few favorites or pick an entirely new line up of tokens.”

The fan-picked MONOPOLY tokens will be updated in the MONOPOLY game hitting shelves this August. Hasbro will also introduce the MONOPOLY Token Madness Edition which includes the current eight tokens, plus eight golden colored tokens included in the vote, available now for the approximate retail price of $19.99.

MONOPOLY tokens have been a key element of the game since it was introduced in 1935. The racecar, thimble, shoe, top hat and battleship were among the original set of MONOPOLY tokens while the Scottie dog and wheelbarrow were added in the early 1950s. In 2013, fans voted the cat token as the newest Monopoly game piece while the iron token was retired after receiving the lowest number of fan votes.

Now is your chance to make a difference and bring back the iron token if you want.  Go to http://www.votemonopoly.com/ and make your voice heard!