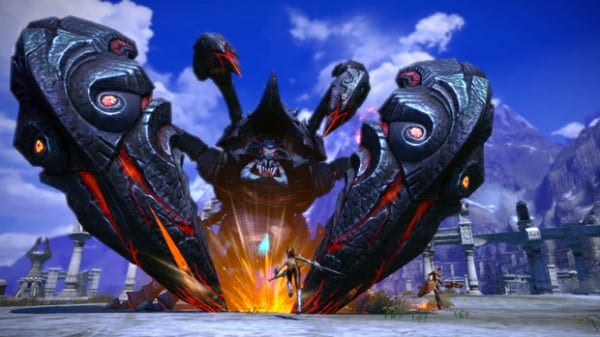 I’ll fess up immediately: the Giant Carnivorous Crab is not running for office. Too many scandals. However, for those of you whose MMO curiosity was peaked by the previous TERA Online review, I bring you some news. Well, more like the fellows at Rock Paper Shotgun bring you news, and I point you in their direction while giving a little commentary. The short version is that everyone’s favorite action-and-skimpy-outfits MMO has decided to infuse some EVE-Online into their game. The long version… continues inside.

From the aforementioned folks at RPS:

For the uninitiated, Tera now hosts monthly player-driven elections that allow players to become “Vanarchs” of certain regions. This allows them to do leaderly things like levy taxes, manage stores (OH GOD SOCIALISM), enable and disable certain trainers, and even shut down open-world PVP. Also, they get a neat horse. The end result? A race to the top with all sorts of wild political maneuvering – at least, initially.

“An MMO is about choices within a world,” senior producer Brian Knox explained to RPS. “We have a story we want to tell, and that is told through our progressive content from levels 1 to 60. Once you hit 60, though, we want the stories to be yours. Whether politics, big-ass monsters, PvP, or role-playing is your thing, we want to help facilitate that.”

Now, while I really liked TERA – it’s a beautiful game, and one that plays extremely smooth for an action MMO – the political aspect was easily the most intriguing aspect of it. Frankly I didn’t have time to get into that for the review, as it wasn’t even really live at the time, but really… this sounds like a brilliant move. If you’re a regular MMO news reader, you’ll notice that EVE-Online sometimes seems like the most covered MMO, despite the niche aspect of the game (put short, you have to really love sci-fi, realtime strategy, economic simulations and excel spreadsheets – all at once.)  That’s largely because the players are given so much freedom to affect their world, freedom that goes beyond getting on a treadmill and snuffing out dangerous enemy X. Early indications are that TERA wants to make this concept a major part of their game.

So consider this yet another reason to keep an eye on TERA. If the political concept works there – a far more mainstream and easily-accessible style of MMO – you can count on it showing up in other games in short order. It may be the next ingredient in making MMOs addictive since World of Warcraft introduced a trading card game with online-redeemable loot cards.