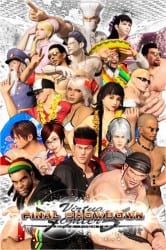 Virtua Fighter 5 Final Showdown, the latest arcade installment in the series, will be coming to the Playstation Network today and Xbox Live Arcade tomorrow. Haruki Satomi, Senior Vice President of Digital Business at SEGA of America, said this:

Virtua Fighter has always been praised by fans for its detailed, delicate balance and depth, making it the fighter of choice for both first-timers as well as serious pros. We’re especially proud to see Virtua Fighter 5 Final Showdown appearing at this year’s EVO tournament inLas Vegas; we can’t wait to see the game in the hands of fighting game fans at the community’s biggest event.