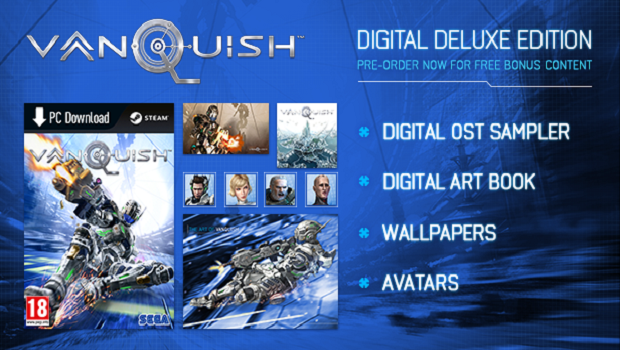 In the vein of last month’s Bayonetta PC release, Sega has announced today that PlatinumGames’ Vanquish will get a PC conversion release on Steam May 25. Additionally, a digital deluxe edition will be up for pre-order, with an additional discount for those who have purchased Bayonetta on PC.

Directed by Shinji Mikami, the creator of the Resident Evil™ series, VANQUISH is a sci-fi shooter of epic proportion. Take control of DARPA operative Sam Gideon, who has been assigned a mission to battle legions of future-tech enemies using a vast arsenal of weapons. VANQUISH boasts fluid and frenetic combat, spectacular melee moves, and intense speed, wrapped in a gripping story. VANQUISH is the latest best practice conversion from SEGA, and features a host of PC optimized options, including an unlocked framerate, 4k resolution support, extensive graphics options and full keyboard and mouse support.

In addition to the standard edition of Vanquish, Sega has announced a digital deluxe edition, which includes a 5 track soundtrack sampler, character and enemy avatars, art book and exclusive wallpapers. This version of the game will only be available to buy until the release date, and those who purchase Bayonetta by May 25 will be eligible for a 25% discount.

Vanquish is available May 25 for PC, and is currently available on PlayStation 3 and Xbox 360. Stay tuned for more news here on Gaming Trend.