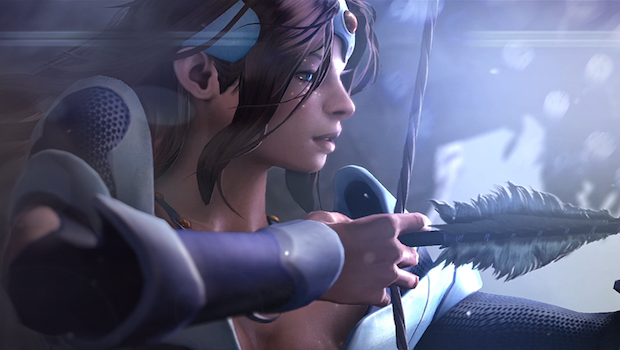 In the first of three announcements, Valve has revealed the overhaul its been working on for Dota 2, dubbed “Dota 2 Reborn.”

Reborn will feature a completely redesigned Dota 2 user interface, a revamped version of the game engine running on Source 2 code, a bevy of new spectator and chat features, and the addition of Custom Game modes, which will allow for modded game modes in public lobbies.

Today’s update focused completely on the UI and out-of-game features. Every inch of the game, from the lobby to the shop to even the party screen has been updated and given a new, clean look. Featuring opaque menus and sharp graphics, it’s a much sleeker interface compared to the medieval-fantasy aesthetic of the original release.

The party system now allows for full party invites, meaning if you’re in a lobby with two friends and another friend invites you to their party, you can accept and bring your lobby with you as well. Voice chat, a feature already in-game, is also now available in party lobbies for teams to plan, strategize or just shoot the breeze before a new match. There’s also a party beacon option, which allows players looking for a team to broadcast that search to their friends list.

Individual player profiles have been given many new options for tracking individual hero performance at a glance and new social options. Miniprofiles show highlighted items and their performance on favorite heroes at a glance, while the new activity feed lets players upload highlighted replay clips with tags to share gameplay moments quickly with their friends list. Land a crushing Echo Slam on a Broodmother? Make an impossible escape as Timbersaw? Go into the post-match replay, highlight it, and share it to your activity feed to let your friends watch and comment on it.

You can also see Hero MMR and stats, tracking both yours and friend’s performance on different heroes and roles, and view playstyle graphs that denote your strengths and weaknesses throughout different areas, such as GPM, last hits and camps stacked.

DotaTV, the spectator client within Dota 2, is also getting an update with features designed to improve the overall spectating experience at both the casual and competitive level. The new DotaTV will support full broadcast video production, as well as integrating stats and graphs, all of which will be available through either the client or the web. Full 1080p 60fps streaming and live pause-rewind features will be usable in all live games and tournaments, and any third-party streams from different production studios will be accessible in-client.

Replays can be saved into a DVR-esque feature as well, and tournaments can be followed in a bracket that tracks tournament progress, VODs, and information like casters and participating teams.

Tutorials have been expanded with Guided Bot Matches to help further the learning experience started by Dota 2’s tutorial. These Guided Bot Matches will display hints and suggestions throughout the game, helping new players better understand the natural flow of a Dota 2 match and gain pseudo-real-world experience without the stress of a public match.

This is the first of three updates, with the second coming at the start of next week and concluding at the end of that week, at which point Valve will release the Dota 2 Reborn beta for anyone to opt into and play. The coming post will feature Custom Games, an anticipated update for those familiar with the custom game scene that spawned Dota 2’s predecessors. We’ll keep you up-to-date as these updates continue to roll out.