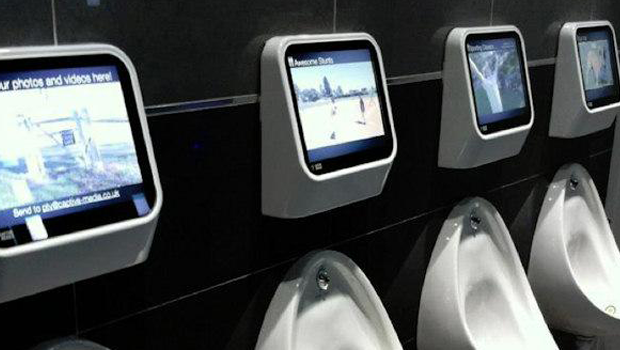 Dust off those Wii jokes, because there’s now a fresh reason to make them! The Lehigh Valley IronPigs – right in the backyard of yours truly – have decided to install urine-controlled video games into their restrooms, making them (according to US News and World Report) the first American sports venue to feature the devices. And yes, these truly are urine-controlled games according to the news, featuring on-screen avatars that react to the movement of your… uh, flow. Which makes sense, because the only alternative I can think of is a touch screen monitor – and really, I can’t think of where you could place a monitor that would make me want to touch it less.

The games are developed by a British company called Captive Media, which surprises me because I would have bet my wallet that the Japanese were behind this. They already have a selection of games available, with names like On the Piste, Clever Dick, and – my personal favorite – 100ml dash. Come on, that’s witty, give them credit. But the real interesting one is Opeenion Poll, a game which apparently marks the moment companies found ways to scour marketing data out of potential consumers even while they’re using the urinal – an impressive feat by any measure. I’m kind of hoping this one catches on, because I love thought of a controversy breaking out where Gallup’s poll results turn out to be skewed by people who have large bladders. On second thought, given the location of these games, I suspect they’ll be used for Pew Polls instead.