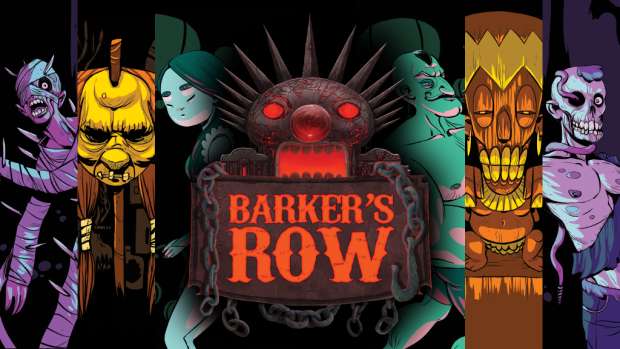 The circus is kind of a lost art these days.  Going to a stadium to see animals and people perform doesn’t seem to have the same kind of appeal these days.  However, that doesn’t mean it can’t make an interesting theme.  See all the oddities in Barker’s Row, now up on Kickstarter.

The game design by Steven Aramini (Yardmaster, Circle the Wagons) takes a step away from what Overworld Games is known for: hidden identity and deduction. Players embody carnival barkers who win by being the first to fill their grandstand seats with custom meeple rubes. They describe their attractions to the crowd with adjectives like “Terrifying,” “Spine-Tingling,” or “Mind-Bending” in what feels trick-taking-ish… but isn’t. As players climb the Strongman Tower, their future attractions are more challenging to play, serving as a subtle and elegant catch-up mechanic.

The illustrations by Andrea Olgiati (Winter Tales, New Salem) are in the grotesque-noir style that make this carnival eerie and fantastic — and like nothing you have ever experienced. His custom meeples are a darker, disfigured style that departs from the cartoony meeples we are used to seeing in other games. The 3D chipboard grandstands and strongman tower loom over the midway compelling passers by to stop and take a closer look.

Be sure to take a look at the Kickstarter.  The components look great, and they really bring out the theme.  If you ever wanted to bring your meeple to the circus, be sure to check out Barker’s Row.