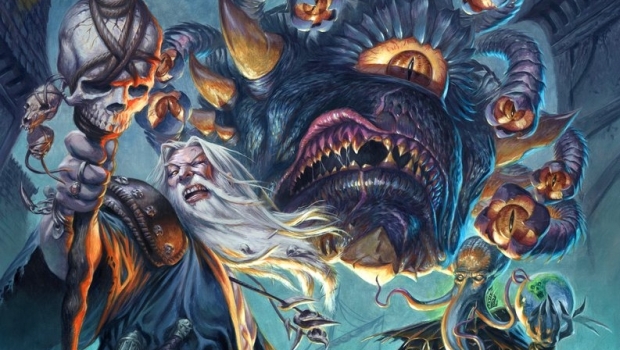 If you have played Lords of Waterdeep, then you know that it’s a great game.  While the iOS version does have a few issues, it is a faithful recreation of the game.  Now Playdek has added more to the Waterdeep experience with the inclusion of the Undermountain expansion.

The new expansion gives players the chance to explore Undermountain, a vast and multileveled dungeon beneath Mount Waterdeep that once served the crazed wizard Halaster as a site for magical experiments. In this labyrinthine with few refuges for weary adventurers, players can enter new quests to discover rumored wealth but must brave the mysteries and monsters beneath the City of Splendors.

With three new Lord cards including the Wizard Halaster Black Cloak, clever dandy Danilo Thann, and Halaster’s apprentice Trobirand, players can test their skills on four new quests and new intrigue cards. An expanded gameboard with three new buildings and an extra agent, as well as a handful of new buildings for purchase, keep the gameplay challenging.

“The Undermountain expansion is a highly-anticipated release that fans have been asking for since day one,” said Joel Goodman, CEO, Playdek. “Being able to work with the talented people over at Wizards of the Coast on this expansion has been exciting and we are happy to be able to bring this out for our fans to enjoy.”

With the expansion, the game supports up to six players (up from five) in pass-and-play and asynchronous online multiplayer, as well as player-versus-computer, giving even more players the chance to engage in D&D action whenever they want.

A strategic board game with worker placement mechanics, Lords of Waterdeep allows players assume the role of masked Lords controlling the intriguing city of Waterdeep, one of the most beautiful yet dangerous port cities in the Forgotten Realms. The Lords’ identity remains secret during gameplay so strengths won’t be visible to opponents. The masked Lords vie to purchase buildings and control the city by recruiting agents, whom they send on quests to gain power. At the end, the player with the most victory points wins.

To see images, technical requirements and more information, please visit playdekgames.com. To celebrate the arrival of the Undermountain expansion, Lords of Waterdeep is on sale for one week for $4.99 and Undermountain is available for $ $2.99 on the App Store.

Being on sale for a week means you have a limited time to pick up the original Lords of Waterdeep.  While I wish that the entire Scoundrels of Skullport expansion was included, at least something is better than nothing.  Hit the App Store and update Lords of Waterdeep, if you haven’t already done so, and get the expansion through an in-app purchase.