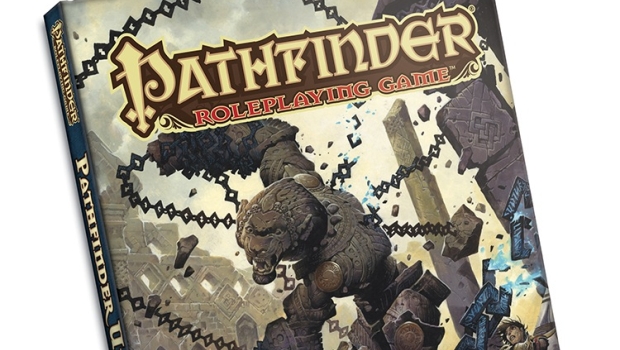 It seems like now is a great time to be a fan of RPGs.  The updated D&D 5th Edition has been a hit and is coming into it’s own.  FFG has come out with a Star Wars system with unique features.  Soon the Mutant Chronicles books will be available from the Modiphius Kickstarter.  The Pathfinder series has come on strong since its inception, challenging D&D 4th Edition.  Now Paizo has released Pathfinder Unchained, a new companion book with several updates.

From totally revised fundamentals like core classes and monster design, to brand-new systems for expanding the way the game is played, Pathfinder Unchained makes the player the game designer, and offers fresh ideas while still blending with the existing system.

Said Jason Bulmahn, Lead Designer for Pathfinder, “Over a year ago, I went to talk to Publisher Erik Mona about a book idea I had. The pitch was simple: ‘Let us do a book filled with whatever crazy ideas we have floating around in our heads.’ He said ‘no.’ I said, ‘Wait though, allow me to explain, our crazy ideas might make the game better.’ He said ‘tell me more,’ and Pathfinder Unchained was born.”

Pathfinder Unchained is available at hobby game and book stores nationwide, as well as on paizo.com.

I’m all for making these systems easier to play, since RPGs can be intimidating for people who have never played one before.  If you’ve found the system a bit too rigid, be sure to get Unchained and see where your imagination can lead you.