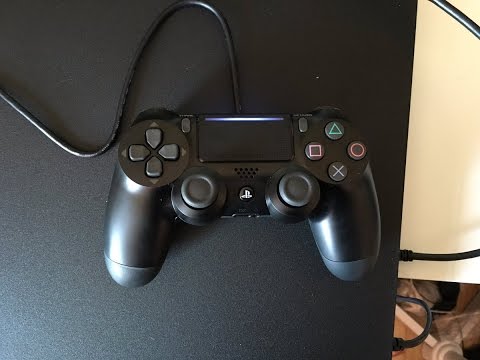 An unboxing video of the unannounced PS4 slim model has surfaced on YouTube.

In the video, Laura Kate can be seen unboxing an instruction manual, an HDMI cable, the new DualShock controller, power cables, a USB cable for the controller, and the console itself. The console is identical to images seen on various auctioning sites last week. The console’s box and packaging also appear to be the same as other leaked images. The video also shows Kate connecting the console to a TV and powering it on.

The console in the video has two USB ports, eject and power buttons, and a removable plastic plate for swapping out the hard drive, but it does not — as was alleged in previous leaks — have an optical port.

The new DualShock controller appears to be identical to the current DualShock 4 save for a new lightbar which shines through the touchpad.

This new footage of the unannounced console comes just days after multiple images of the alleged console surfaced on auctioning sites in the UK. Video footage of one of the auctioned off consoles had been taken by Eurogamer, but the video was taken down shortly after they received “legal advice.”

PlayStation will be holding an event entitled the PlayStation Meeting in New York on September 7, where it is rumored the company will finally reveal this obviously real PS4 slim model as well as the long-awaited PS4 Neo.