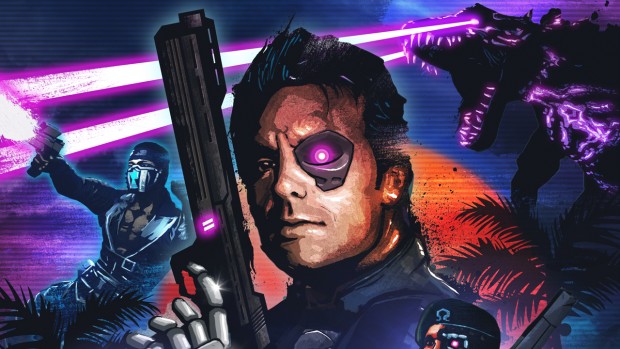 The mega-publisher Ubisoft has just announced several new additions to their digial lineup for the next few months, and it’s looking pretty impressive. We’ve got the 1980s-drenched Far Cry 3: Blood Diamond, the HD re-release of cult classic Flashback, and Cloudberry Kingdom, a randomly-generated platformer. Why listen to me, though? I’ll let the descriptions speak for themselves.

Far Cry® 3 Blood Dragon
Developed by Ubisoft Montreal, Far Cry 3 Blood Dragon lets players get the girl, kill the bad guys and save the world in a VHS-era vision of the future!  As Sergeant Rex Colt, you are part man, part machine, all American.  You are a state-of-the art Mark IV cyber-commando on a mission…of vengeance.  You’re out to bring down your old commanding officer and his battalion of ruthless killer cyborgs and you’ll stop at nothing to get the job done.  Hollywood action icon Michael Biehn (The Terminator, Aliens, and The Abyss), returns in this explosive 1980s style sci-fi vision of a dark future.  Turn off your VCR, plug in your video game cabinet, and get ready to experience all of the thrills of Far Cry 3 Blood Dragon, releasing May 1, 2013 as a stand-alone digital title. All PC pre-orders will receive a free copy of the soundtrack by Power Glove.  And yes, we do have Blood Dragons shooting lasers from their eyes!

Flashback
To celebrate its 20th anniversary, Flashback is back in 3D and HD.  Updated for the new millennium by its original creator and rendered in 3D by the power of the unreal engine, a new generation of players can now experience a game that helped define sci-fi Action/Adventure games.

Conrad is back to save humanity from an invasion of alien Morphs set on absorbing our minds and incorporating our species!  Rolling and shooting, always ready for another fight, help Conrad save the world and his girlfriend.  You’ll find everything you always liked in this classic that set standards of the genre in the 90’s, and brought up to speed with the 21st century technology and expectations.

Cloudberry Kingdom
Unhappily ever after?  That’s how it starts.  The Orb resurfaces and the classic characters return.  Kobbler with his mania, Princess with her endless boredom.  It’s only a matter of time before Bob, our hero, shows up to put order back to madness.  Three powers struggle for victory and the fate of Cloudberry Kingdom hangs in the balance.  What will become of the retired hero, Bob?  Will saving Princess one last time win her love?  Could true love stop Kobbler and the power of the Orb?  No, probably not.  But hey, it’s worth a shot.

Welcome to Cloudberry Kingdom, the first ever platformer with fully randomly generated levels.  Every level is brand new and never seen before.  The difficulty level can match any need, from the casual to the hardcore.

Not a bad list at all. Far Cry 3: Blood Dragon unleashes its brand of insanity May 1st on Xbox 360, PlayStation 3, and PC for $15/1200 MSP. Preordering on Steam will net you the entire soundtrack for free, and you don’t even need the original game to play it — leaving me to wonder why they called it Far Cry 3 in the first place. Ah well, it sounds amazing. The other titles will release later this year, with release dates to be announced later. Sign me up.