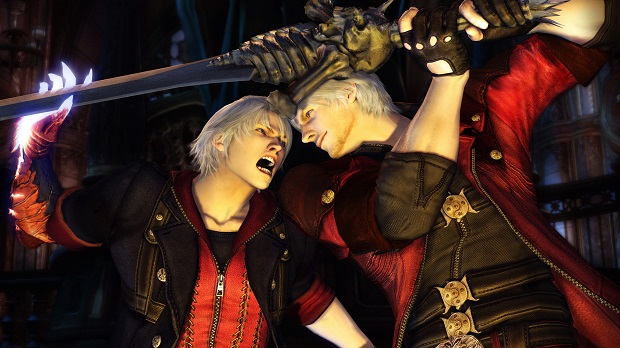 It appears that Ninja Theory’s unannounced project was a PS4 and Xbox One “Definitive Edition” of DMC: Devil May Cry.

The $39.99 updated version will come to current-gen consoles on March 17th. A current-gen version of 2008’s Devil May Cry 4 will also be released in 2015, but there was no concrete release date revealed.

A post on the PlayStation Blog reveals all the updated content the PS4 and Xbox One version of DMC will have when it comes to the consoles next year:

• 60 fps and 1080p resolution — It looks and feels super smooth to play.
• Uprezzed Graphics — Including textures, characters, and cinematics.
• Big Bundle of Content — The game includes DmC: Devil May Cry, plus all released DLC: Vergil’s Downfall campaign, 3 Dante skins, 3 Dante weapon skins, and the item finder.
• New Skins — 2 new character skins. Devil May Cry 1 Dante and Classic Vergil.
• Turbo Mode — Turbo Mode returns to the Devil May Cry series, with the game running 20% faster in this mode.
• Hardcore Mode — Hardcore mode retains the experience of DmC, but with a throwback to the classic Devil May Cry games in terms of balance. In this mode, which can be toggled on all difficulty levels, the style system has been rebalanced to make ranking up much harder and ranks deteriorate much quicker. In addition, Devil Trigger doesn’t launch enemies into the air, parrying takes more skill, and all enemies hand out more damage.
• Manual Target Lock — We’ve seen more requests for this than any other feature! The manual target lock works as closely to the classic Devil May Cry lock on as possible and has fully configurable controls.
• Vergil Bloody Palace — Only second to Manual Target Lock in terms of the number of fan requests! This is a new Bloody Palace mode featuring 60 levels and Vergil as the playable character.
• Must Style Mode — This is a hardcore modifier on an epic scale that can be played over any difficulty level. Players must be at an S rank or higher to deal any damage to enemies.
• Gods Must Die Difficulty Mode — This is DmC Definitive Edition’s hardest difficulty mode. It takes DmC’s ridiculously hard Dante Must Die mode and adds a touch more punishment: All enemies spawn with Devil Trigger active and no items or health drops can be used.
• Rebalanced and Retuned — We’ve studied fan feedback and made a whole host of tweaks and balance changes. The style system has been rebalanced, as have bosses. Exploits have been fixed in combat and some of Dante’s moves rebalanced, such as the Demon Evade. Gameplay tweaks have been made following hardcore player testing; frames have been removed from Kablooey shots, Parry/Evade windows adjusted, and collectibles, keys and doors redistributed.
• Integration of Popular Community Mods — DmC Definitive Edition includes community mods such as an optional timer disable for Bloody Palace Mode, a triple dash for Angel Evade, and the ability to hit red and blue enemies with any weapon.
• New Cutscene — an added cinematic scene that never made it into the original.

For more on DMC, check out the Gaming Trend review.