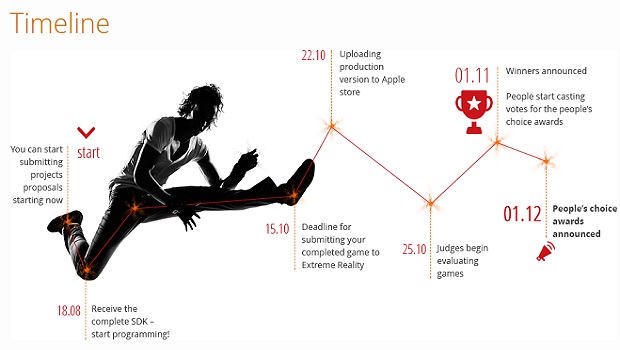 A little while ago, we interviewed Extreme Reality about their new motion gaming software that uses a standard 2D camera to track your movements and translate them into the game world. The software is called Extreme Motion, and the developers have started the “Extreme iPad Challenge” development contest as a part of a push to get more developers using the technology. Cash prizes of up to $10,000 and a MacBook Air are up for grabs for iOS developers who can create a compelling motion title for iPads. Also on the line is a meeting with EA founder and contest judge Trip Hawkins, who had this to say about Extreme Motion:

“The Extreme iPad Challenge is the perfect way to showcase the talent of indie developers while also incorporating the Extreme Motion technology on iOS,” said Trip Hawkins, founder of Electronic Arts. “It’s clear that motion control on multiple platforms will have a dramatic impact on the gaming industry in the coming years and the Extreme Motion technology is on the forefront of this trend allowing developers to create unique games of all genres and enhance the overall user experience.”

Trip Hawkins will be judging the entries along with Jeff Pulver, founder of Vonage, David Nixon, Content Director for the Casual Games Association, and Matt Turetzky, COO of mobile developer Lima Sky. Games will be judged in a number of categories, including gameplay, graphics, audio, and effective use of motion controls. More information is available at the contest page here.