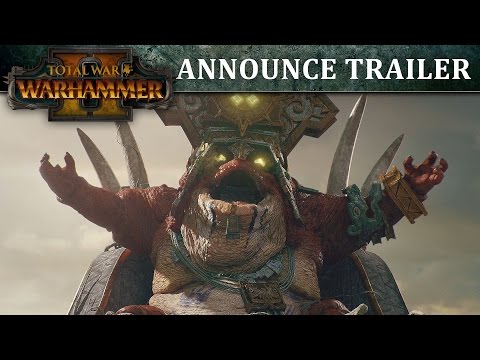 The countdown has come to an end.

Total War: Warhammer 2, the second installment of what publisher Sega has promised to be a trilogy, will be released at some point in 2017.

Fans have speculated (and quite accurately so) that Warhammer 2 would feature four new races: Lizardmen, High Elves, Dark Elves, and Skaven. The first three have all been confirmed within the trailer and by the game’s official press release. The fourth, however, remains an official mystery (read: not really a mystery). The conclusion of the trailer shows a large rodent with red eyes gazing deviously at the camera, and if you’re a Warhammer Fantasy fan, that can mean only one thing: Skaven.

Warhammer 2 will ship with four new continents: Ulthuan, Naggaroth, Lustria, and The Southlands. And, in an interesting Total War first, Warhammer 2’s campaign, instead of the usual build, expand, and conquer until everyone else is dead formula, will feature a new end-game.

In a Total War campaign like no other, players will struggle for dominion over the ailing Great Vortex that has swirled for millennia above the elven homeland of Ulthuan. Performing a series of arcane rituals, each race must save or disrupt the Vortex according to their motivations – a struggle culminating in a cataclysmic endgame. Territorial conquest is no longer enough… this is a race for control that will define the fate of the world!

Total War: Warhammer 2 will be a stand-alone expansion, but its campaign map can be combined with that of its predecessor to form a “mega map,” on which all available races from both games are playable. This feature is to be made available shortly after launch, and for free.