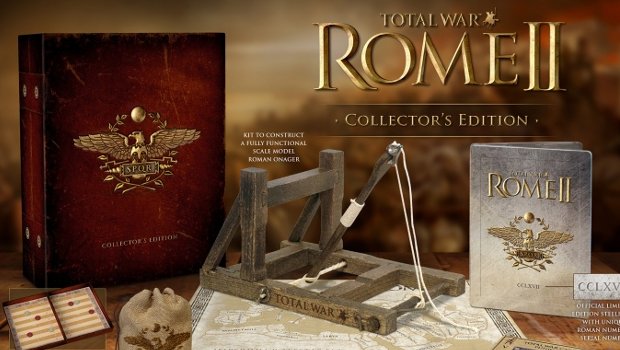 News that Total War: Rome II will be coming this September is welcome enough – really, it’s a fantastic strategy game that continues to be an absolute wonder to simply watch people play. The fact that there’s going to be a Collector’s Edition is also nice, if not totally surprising. But the fact the CE also includes a kit to construct a fully functional Roman siege catapult? Now that’s eye-catching. Of course, it looks a little on the simple and certainly small side. Perfect if you want to wage war on some Smurfs, or perhaps the neighbor’s garden gnome. Still, as far as enticing CE pack-ins go, it’s going to be hard to top ‘fully functional catapult’ no matter how many caveats are added into the mix.

Also included in the CE edition:

That’s actually quite a nice collection of neat little toys and knick-knacks. On the other hand, it damn well better be – this limited run collector’s edition costs $155 USD for the American version, and I imagine there costs are similar or even higher everywhere else in the world. The wiki page details all of this, plus contains links for those who wish to pre-order the game and guarantee their eventual acquisition of tiny catapult and assorted bone-effect accessories. It’s a good day to be a Total War fan with money to burn.