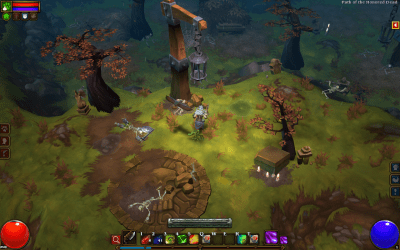 Today, Perfect World Entertainment released an opening cinematic trailer for the game Torchlight II, which is set to be released sometime this year. Torchlight II is the sequel to the original Torchlight released back in 2009, and will feature many of the same action RPG elements. As in the original, much of your time will be spent exploring randomly generated dungeons and fighting a variety of monsters to gain experience and loot. There will also be new features like multiplayer, character customization, weather effects, and a longer campaign. The new trailer (after the jump) bridges the gap between the two games.

This particular cinematic opens the game, filling in the story between the end of Torchlight and the beginning of your hero’s quest in Torchlight II. Art Director Jason Beck created all the storyboards, and Klei Entertainment animated the scenes with sound effects. JD Wiker wrote the script, and Matt Uelmen assisted with sound effects and provided the score.

The cinematic trailer is indicative of a new move the developers are making with Torchlight II. The storyline of the original Torchlight was one thing the developers felt was lacking, due to time and budget restraints. Now that they have more breathing room in those areas, cinematics will be used to provide more context throughout the game. In addition to opening and closing cinematics, there will be two more throughout the story. “Some of the inspirations included the opening 2D sequence in Kung-Fu Panda, the cinematics from Heavenly Sword, the flashback God of War 3 cinematics, and Samurai Jack”, according to art director Jason Beck. Judge for yourself by watching the trailer below.