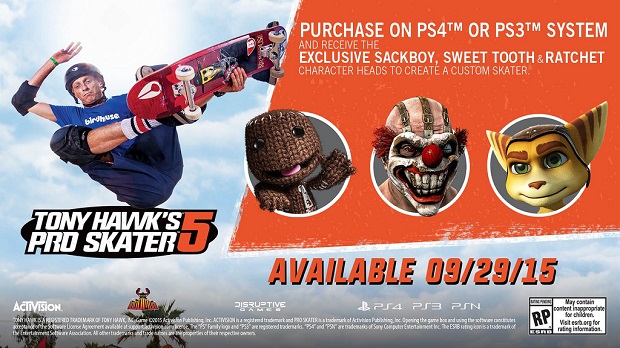 Sony and Activision have announced that Tony Hawk’s Pro Skater 5 will be getting exclusive content on PlayStation consoles featuring characters from some of their first-party franchises.

A post on the PlayStation Blog confirms that players will be able to use character head skins based on Sackboy from LittleBigPlanet, Sweet Tooth from Twisted Metal, and Ratchet from Ratchet & Clank if they purchase the game on PlayStation 4 or PlayStation 3.

The PlayStation 4 version is coming out on September 29th for $59.99, while the PlayStation 3 version will come sometime before the end of 2015 for $39.99, but will also lack online play. The game will also be available for Xbox One and Xbox 360.

For more on Tony Hawk’s Pro Skater 5, check out our preview from this year’s E3.